27-year-old Israeli tourist Novon Mashiah almost discovered the hard way how far you can push a saltwater croc in Australia.

"One minute I was leaning over the boat teasing it for a picture. The next minute it burst out of the water with incredible speed ... its jaws fully open. I was shaking,'' he said.

Now, one might say this is Darwinism at play here, or is this something else?

With the rapid explosion of wild animal encounter shows like the Croc Hunter and others is the public being shown a side of wildlife encounters that eventually lead to events like these? 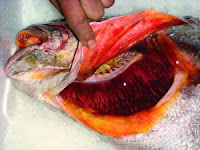 Last week a rare if not almost extinct fish was celebrated by local fishermen...and then promptly sold and eaten.

Turns out the swim bladder (not the whole fish) is worth it's weight in gold and this particular fish species called the Bahaba flavolabiata has not been seen in this region of China for almost 50 years.

The fisherman who caught this rare "Last of the Mohicans" is set to make almost 1 million Yuan or close to $150,000 US.

In April 2007, a fisherman in Zhanjiang City, Guangdong province, netted a 49-kg Chinese bahaba and sold to a restaurant for 580,000 yuan. The restaurant cooked the fish meat but has kept the dried fish maw (mouth), tagging it at 2 million yuan with words "not for sale."

It is into this environment that the worldwide shark fin market is pouring the oceans sharks into. With scarcity-pricing for rare animals used for just their maws, fins and swim bladders runs at all time highs.
Posted by Horizon Charters Guadalupe Cage Diving at 7:02 AM No comments: