The Death of Intellectual Curiosity 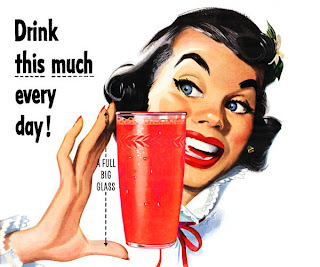 Intellectual curiosity is a term used to describe one’s desire to invest time and energy into learning more about a person, place, thing or concept.

On this day, May 29th, 2012 we are hereby declaring Intellectual Curiosity - Dead.

And what, pray tell, caused this statement of fact to surface on our hallowed blog you may ask?

It is an email circulating about a recent story in the Santa Cruz Sentinel. One that made outlandish and completely unsupported claims of a shark tag found on a recently caught white shark in the Sea of Cortez.

What's at stake is everything we know about white shark movements in the region and as the author of this email rightly points out, "falsified data may lead to the misinterpretations that could take a generation to correct."

The story about the tag caught our full attention many weeks ago when it first ran. Unlike far too many who accept as gospel fact the forthright media drivel being spoon fed to conservationists, a sorry state of affairs we call "The Sea Shepherdization" of conservation. We have always reserved the right to ask questions and drill down into the facts.

In the hands of those who propagate conservation nonsense it has been re-branded as, "meddling, jealousy, and hate."

The persons penning the email put forth a well known character in shark conservation and politics Dr.Michael Domeier. You may recall our blow out with him over the Junior Affair at the Farallones in California a few years ago.

Say what you want about that particular timeline our argument was with the animal and methods of tagging. What has recently transpired in the Sea of Cortez at a little place called El Choyudo will undoubtedly go down as the worst of shark conservation and science and a complete validation of how in today's media environment those who would invent utter conservation nonsense can in fact, be heard, be accepted, and be considered relevant.

Again, when Paul Watson can fake being assassinated to secure a second season of a reality tv show and NO ONE in the wider conservation sphere calls him or his organization on it, the world pays attention.

And those who do - emulate.

Welcome to the death of intellectual curiosity.

Fortunately Dr. Michael Domeier expresses a deep and abiding intellectual curiosity for sharks and was unwilling to accept a story that suggested that one of the largest recorded sharks in the Sea of Cortez history had a tag on it from California.

We too were dubious, but our investigations only followed up to images of the tag.

What caught us were the nature of the images. In one, the alleged tag was in place with a small knife for perspective. Something only a researcher would do, certainly not a small village fisher-woman in Mexico.

Our inquiry ended with several conversations with the reporter at the Santa Cruz Sentinel and was left unfulfilled. Until the industry email we read today.

Kudos to Dr.Domeier for following up on this story, his efforts are to be lauded. He has exposed a lie pure and simple and one that causes the world as we know it to be diminished. Made smaller and cheaper by the fact that this animal was attributed to places and people it had never encountered.

We can all learn a lesson from this. This is the titular "Emperor with No Clothes" moment displaying to shark conservationists worldwide how the death of intellectual curiosity is hurting is all.

Stand and be curious.


About Shark Diver. As a global leader in commercial shark diving and conservation initiatives Shark Diver has spent the past decade engaged for sharks around the world. Our blog highlights all aspects of both of these dynamic and shifting worlds. You can reach us directly at sharkcrew@gmail.com.
Posted by Horizon Charters Guadalupe Cage Diving at 4:57 PM 2 comments: 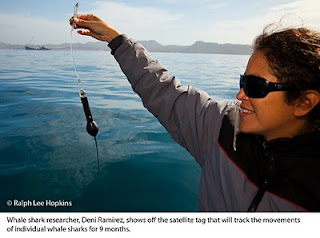 Back in 2009 we had the distinct pleasure of meeting Dr Dení Ramírez at the Socorro islands in Mexico.

She was on an exploratory trip to the islands studying the elusive Whale Shark (Rhincodon typus).

Dr Ramírez latest focus is on Holbox, well known to shark fans the world over as perhaps one of the best places to interact with and see large groupings of these magnificent critters. She has recently publish a new paper on her findings in the Journal of Fish Biology.

Sadly there's growing evidence of vessel strikes on these animals that may be attributed to commercial shark tourism in the region.

Photo-identification and conventional tagging were used to estimate population size and structure of the whale shark Rhincodon typus near Holbox Island, Mexico. From 2005 to 2008, photographs of spot patterns behind the last gill slit and in a lateral view on the left side of each animal were used to identify individuals. Additionally, 578 R. typus were tagged using conventional marker tags. Of these and the 350 R. typus that were identified from 1184 photographs, 65% were male; 27%, female and 8%, indeterminate sex. Photographed R. typus ranged in size from 2·5 to 9·5 m total length. Size was bimodal with a large peak at 6 m and a smaller peak at 7 m. Photo-identification showed that there was considerable loss of marker tags. Few of these remained on the animals for more than a year, so that interannual re-sights using tagging could not be used in population modelling. Forty six interannual re-sightings were found in the photographic library; the interval between these re-sightings was typically 1 year. It was estimated that the R. typus aggregation near Holbox Island ranged from 521 to 809 individuals, based on mark-recapture models. From 13 to 33% of R. typus photographed had scars that were attributable to boat strikes. This study provides a baseline for assessing the status of R. typus near Holbox Island. This information is useful to understand drivers of local population size and distribution and potential concerns about increasing effects of tourism on R. typus in this area and for designing better management programmes for R. typus conservation.

About Shark Diver. As a global leader in commercial shark diving and conservation initiatives Shark Diver has spent the past decade engaged for sharks around the world. Our blog highlights all aspects of both of these dynamic and shifting worlds. You can reach us directly at sharkcrew@gmail.com.
Posted by Horizon Charters Guadalupe Cage Diving at 8:10 AM No comments: 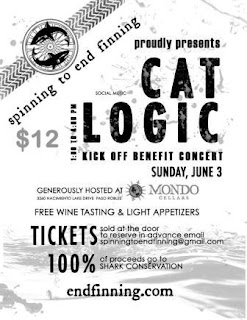 2 - The primary movers behind Spinning to End Finning

1268 miles - The distance from Colorado to Kentucky

Grass roots California based shark conservation initiative Spinning to End Finning will be holding a fundraising event in Paso Robles, California to promote the group’s bike ride from Colorado to Kentucky this summer to raise awareness of sharks and funds to support shark protection projects in Costa Rica.


About Shark Diver. As a global leader in commercial shark diving and conservation initiatives Shark Diver has spent the past decade engaged for sharks around the world. Our blog highlights all aspects of both of these dynamic and shifting worlds. You can reach us directly at sharkcrew@gmail.com.
Posted by Horizon Charters Guadalupe Cage Diving at 7:46 AM No comments: