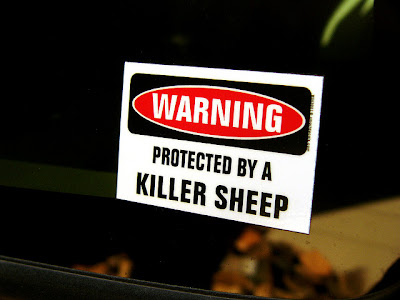 While the conservation and commercial shark diving worlds mobilize to counter Western Australia's plans for a reversal in white shark protections and a series of limited culls of these magnificent animals in response to several deaths in the region, we came across another interesting sheep/shark connection to this story.

For those who follow this blog we also looked at the sheep/shark connection in Egypt during a series of unprecedented shark strikes last year.

Of course right about now Da Shark, located at his Blogger Bunker somewhere in Fiji, is screaming bloody murder at the very thought of dead sheep thrown into the ocean leading to sharks strikes on humans.

In fact the notion that several hundred dead sheep suddenly dropped into any region might elicit a higher surface predatory response from local sharks is not out of the realm of possibility at all, and even the Humae Society of Australia seems to think this is an issue:

A spokesperson for the animal protection society, Alexia Wellbelove, said  "thousands of dead sheep ... either whole or minced" were being thrown overboard as ships departed ports for the Middle East "without care or consideration for the consequences".


"It is highly likely that the disposal of animal remains in this way will attract large sharks over a wide distance," Ms Wellbelove said.

So there you have it. All joking aside the real issue as everyone knows are local politicians who will use these unfortunate events to justify more shark nets, a cull structure, and perhaps even a roll back of hard won protections for white sharks in the region.

Kudos to the many hundreds of voices that have jumped on this issue over the past week to say "hell no" and to keep Western Australia white sharks where they belong. In the ocean.

If you want to get involved you can do so here, here and here.

The sharks thank you.


About Shark Diver. As a global leader in commercial shark diving and conservation initiatives Shark Diver has spent the past decade engaged for sharks around the world. Our blog highlights all aspects of both of these dynamic and shifting worlds. You can reach us directly at sharkcrew@gmail.com.
Posted by Horizon Charters Guadalupe Cage Diving at 9:14 AM No comments: