About White Sharks & Conservation: Richard Theiss at The Explorers Club in San Diego 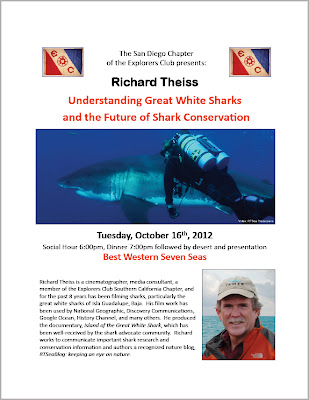 There are some very smart people involved with sharks. They have the innate ability to see the many facets of oceans conservation in ways that bring new insights and fresh views towards the process.

One of these wise sages is Richard Theiss.

You probably don't know much about him because he's one of the quiet ones. He's not out in the community rattling media cages, seeking the limelight, or even trying to get his own Reality TV show.

Lord knows we have enough of these to last a lifetime and for the 100,000 metric tons of sharks that will be processed today absolutely nothing being done by these media conservation circus performers will impact that gruesome statistic.

About the only time you'll hear from Richard is when he has something to say and then the smart money is on those who pay close attention.

We have been paying attention to Richard for quite a few years now for reasons that include his talents underwater, to storytelling, to conservation.

If you want to get into the rarefied air of one of Richards few public engagements, be in San Diego Tuesday October 16th, 2012 at the Explorers Club.

Conservation is a long game, it's got many facets and like a hand knitted sweater if you pull on one thread it impacts the rest. Richard is going to show you one of the greatest conservation webs of all time and what can be done about it today, tomorrow, and in 30 years from now.

About Shark Diver. As a global leader in commercial shark diving and conservation initiatives Shark Diver has spent the past decade engaged for sharks around the world. Our blog highlights all aspects of both of these dynamic and shifting worlds. You can reach us directly at sharkcrew@gmail.com.
Posted by Horizon Charters Guadalupe Cage Diving at 9:24 AM No comments: