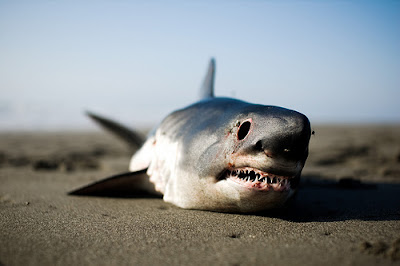 Let the pathos and the gnashing of teeth begin because it's official, Chris Fischer and and his merry band of Shark Men have killed a white shark.

The following is the very best media spin brought to you by lawyers, media writers, and a group of filmmakers who are hoping to be tagging white sharks for a second season on History Channel off the East Coast of the USA this summer:

Shark Wranglers aired the third show of its debut season on History and the men of the shark research vessel MV OCEARCH were devastated after one of the great whites perished in the course of their operation.

It is a risk inherent in the mission which team leader Chris Fischer understands. He described the expedition like this.

Fischer's bio on the History channel website for Shark Wranglers indicates that he had a hand in developing the method to capture and tag the sharks that can weigh up to a ton. Humans can be better protected from shark attacks if the data gathered by the team successfully identifies their whereabouts.

In "The Curse of Maya" the team headed up by Chris Fischer was not only affected emotionally, the mission was put in jeopardy. The body of a dead shark will keep others away from the area and a decision had to be made.

Do the men try and recover the body of Maya to enable them to continue in Mossel Bay or do they move on? They have yet to successfully tag more than three sharks and have fallen behind in their 40 day mission with 47 sharks to go.

The decision was made to go down and try to retrieve Maya and the brave soul who volunteered was Ryan Johnson, the team's lead scientist who has worked with and studied the great white shark species for a decade.

There was no cage surrounding Johnson as he went to find the shark's body and he was given a limited amount of timeto be submerged before he would have to get out of harm's way. Despite the tag on Maya that revealed she was no more than 40 meters from the vessel, she was not found.

The greatest danger is attack from below a person and that means that as the diver resurfaces he is in the most peril. Ryan was retrieved quickly and the team was forced to try and make up the time lost.

They found two others and the capture process is complex. Not only do they need the shark to bite the chum on the line but they must muscle it into a wooden lift that projects from the side of the ship.

Rough seas make the lift vulnerable to cracking because it is exposed on three sides in the water. Wrangling the shark to get it into the lift is quite a chore. Once it is done, team members leap into the lift as the shark lies on the wooden surface.

Keeping the shark alive and as calm as possible is the key to a successful operation, as they implant the device that has a GPS signal on it. With a stop watch ticking, team members perform the necessary mini-surgery..

The crew is vulnerable throughout the time the shark is captured prior to its release, making the action on Shark Wranglers real and exciting. Learn more about the team members and their mission at the Shark Wranglers website, here.

Of course we had a few words to say after the Junior Affair at the Farallones and a shark that was left with 2.5 pounds of rusting hook in its gut during the filming of Chris Fischer's Shark Men in 2011.

Naturally with any reality tv show that hopes to trade off with a modicum of science and or conservation thrown in those who become involved soon realize that the show must go on.

For the sharks who are the centerpiece of these shows we're not sure they would agree.


About Shark Diver. As a global leader in commercial shark diving and conservation initiatives Shark Diver has spent the past decade engaged for sharks around the world. Our blog highlights all aspects of both of these dynamic and shifting worlds. You can reach us directly at sharkcrew@gmail.com.
Posted by Horizon Charters Guadalupe Cage Diving at 10:57 AM No comments: