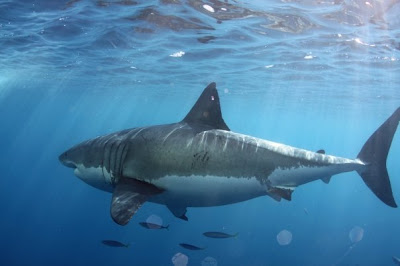 We flew on Jet Blue from JFK on an 8:30 am flight that got us to San Diego around 11:30am, after wrestling with local hotels and a mean front desk clerk and a quick trip to the Gaslamp district we got our ride to the dock where we were greeted by a friendly and kind “Horizon Charters” crew who were totally in control and knowledgeable. My fear of claustrophobia and not being able to get to the head (bathroom) in time in case the sea sick patches were not sea worthy was on my mind.

As we were walking to the “MV Horizon” (boat’s name) the crew Mark and Kyle were joking with Ariel and I making me feel like all was going to be just fine. I took my valium on top of the anxiety pill (which did not seem to be working) to get calm, did I mention I was a bit nervous?

This was the first time either of us had been diving, let alone 210 miles off the coast with white sharks!

The 80 foot Horizon had two very large cages on the deck. Upon boarding we met some of the other crew and passengers. Everyone was friendly and supportive. There were a few others with the same fears as I had.

Customs came on the boat went through all the official stuff and then took off for the 16 hour journey to the Guadalupe Islands. Mark and Beth the kitchen crew made us delicious pancakes for breakfast. On the way there we saw whales sprouting but we couldn’t find them so we continued on after a few minute detour whale watching. Spinner dolphins joined us for a while playing in the wake of the Horizon. Two more meals, diving lecture, getting fitted for our wet suits, a few laughs with the rest of our dive partners and of to bed.

We woke up with cages being put into the water and Mark and Beth were taking breakfast orders we had arrived after months of preparation to Isla Guadalupe.

Martin the Dive Master made a scheduled one hour in the cages one hour out with a half hour for lunch so we got in the cage several times on the first day.

We saw 14 different great white sharks over the 3 days of cage diving.

We saw a few sharks 10 – 20 feet below our cages swimming around. We spent one dive where all we saw were mackerel while we prayed for a shark but none came. Steve our dive mate fixed our hoses when they got tangled; we took pictures of each other and played hand games while we waited in the cold water -down time after a hot shark first day. We ate dinner exchanged memory cards to see each other’s video and pictures. The camaraderie was at an all time high and no one refused to share their amazing shark pics.

As soon as the boat left the cove where we were anchored we ran into huge swells and the boat was getting tossed around. I did not know that a boat could move in so many directions at one time and stay erect. The preventative motion sick patch did not help so we added a 5 mg valium that helped for a little bit but we could not get off the back deck being afraid of losing my cookies.

Ariel suggested we go to our bunk and try to sleep, after being in our bunks for about 10 minutes Ariel grabbed the garbage pail off my bed and put it to good use. Ariel lost it 3 times over a few hours and wound up doing the most puking for the trip. I got sick in between Ariel’s illness and Alec stood by me offering verbal support while his wife Lisa was loosing it down below. However 9 of the 11 of us got seasick and one of the crew did too.

It took us 17+ hours in rough-ocean to make it back to Ensenada, Mexico and boy were we all grateful. Only one person stayed ill the entire trip back but for the most part the ride from Ensenada to San Diego the waves were mild but then again so was our entire food intake for fear of a repeat performance.