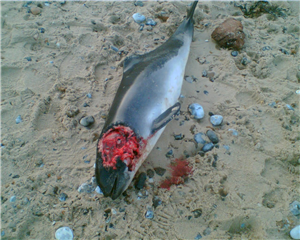 The fine, but concerned, beach-goers of Norfolk have discovered another dead Cetation (whale) off their shores this week.

Prompting calls from the media of a Great White shark off their beaches-locals are in a disagreement of exactly what left this rather sizeable chunk missing from this animals head.

From this image it's hard to tell what actually made this bite. Here's three things it was not:

The crew here at Shark Diver have seen a few attacks over the years and Great Whites tend to either decapitate, or sever the ability of their prey to move with a huge strike to the tail section.

This does look like the work of a Killer Whale, which not surprisingly is found more commonly in the waters off of Norfolk this time of year...of course you're entitled to disagree.
Posted by Horizon Charters Guadalupe Cage Diving at 3:15 PM No comments: