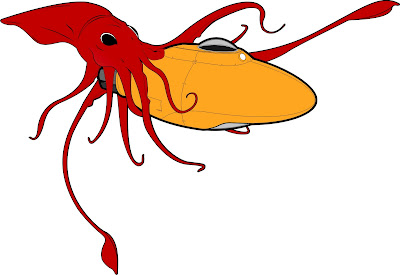 Back from the Sea of Cortez with a small crew filming Dosidicus gigas Scott Cassell sent in this front line eye opening expedition report on the health of our oceans:

I just returned from Baja after leading (and Presenting) an expedition for a National Geographic documentary on Humboldt Squid (Dosidicus gigas). I am not at liberty to discuss the documentary itself but I can tell you that all of my experiments were very successful especially the primary experiment.

The Primary Experiment was simple in concept but proved very challenging to accomplish. Tom Loomis, Sid Mitchell and I designed the experiment last fall as follows:

Take a real Salmon to an environment where no Salmon occur and present it to Humboldt Squid (Dosidicus gigas) as naturally as possible (suspended by invisible monofilament line from a blacked-out frame supporting the Salmon in a swimming posture) to see if the Dosidicus gigas would investigate it as a prey item, stalk it, attack it and eat it.

Actually executing the experiment proved more difficult than expected due to a couple of pesky factors.

First - The region we worked in was Bahia De Los Angeles where a large increase in Dosidicus gigas density occurred simultaneous to the sudden disappearance of the squid in Santa Rosalia (which is normally where I work with friends (Pangeros that commercially fish for the Calamar Gigante... Dosidicus gigas) and they know the Dosidicus gigas behavior very well).

The fishermen in Bahia simply didn't know where to look in the daylight for Dosidicus gigas forcing us to work at night.

Second - The Dosidicus gigas were repulsed by white lights. During my night dives next to the Salmon I bathed it in white lights waiting to capture images of the Dosidicus gigas predating on the Salmon. Trouble is no one came. After 45 minutes I turned off all my lights and just hung in the dark alone with the Salmon. In moments I could see well enough to see dozens of Dosidicus gigas’ as their movements stimulated the algae to emit beautiful bioluminescence illuminating the Dosidicus gigas patrolling in a sphere all around me. Then a few came it fast and hit the salmon so I instantly turned on my lights to film them and they released the salmon and quickly faded out of light-range leaving me without the shots.

Our Solution; We had to figure out how to do an effective test while keeping the Salmon in the most natural situation possible. Then I remembered a prototype LED True-Red emitting light head that Deep Sea Power & Light (DSP&L) had asked me to test. I never thought about using it because by itself it did not emit enough light for my Sony EX-3 to see well enough to film with. Then I remembered that, right before this expedition, DSP&L loaned me a new low-light camera head that could transpose red-light into normal light spectrum image. So we modified the Salmon rig to support the camera and Red LED light 24” above the Salmon and removed the underwater cameraman (ME) from the equation making it an even more natural appearing situation.

We then went out to the ‘squid grounds’ and quickly found a Dosidicus gigas shoal and deployed the new Salmon rig. Within just minutes of submerging the rig (it did not have time to be lowered to it’s target depth of 60 fsw) it was hit by perhaps a dozen Dosidicus gigas reducing the poor 20 lb Salmon to non-existence in seconds. The Red-LED light was obviously either not seen by the Dosidicus gigas or not intrusive enough to quell their feeding ferocity. The entire event was recorded.

Why is this so significant?

The Dosidicus gigas are going to render the Pacific Wild Salmon species extinct (and possibly several more) within a few years and the scientific and government leaders refuse to take notice.

There has been much dispute over eye witness accounts from commercial Salmon fishermen that Humboldt squid were decimating the returning Salmon populations. Some scientists, media, politicians, California Department of Fish & Game and others have dismissed the Salmon fishermen’s claims and blamed many other factors for the historic decline of the Salmon.

With evidence in hand, I intend to rattle some cages and get the problem noticed. The end of this story is grim. With the historic decline of Tuna and Shark species the high fecundity of the Dosidicus gigas has reached wild-fire proportions.

Each Dosidicus gigas many rear up to 20,000,000 eggs and with fewer and fewer predators to keep them in check a massive and historic population explosion has already occurred and is about to reach world-wide plague proportions. The squid now reach as far as the Philippines, Japan, Sitka Alaska, Tierra Del Fuego, Chile and just yesterday for the first time I learned they are now in the Atlantic Caribbean region. To put this in perspective in the 1940’s they were only know to be off the Northern Pacific Coast of South America.

We must stop eating tuna.

We must stop eating sharks.

We must stop eating krill.

We need to eat Dosidicus gigas at an unprecedented rate.

We need to invest in new and environmentally empathetic fish farming methods.

We need to change our self image to that of a culture that leads the world by example.

Help me get the word out by sending me info on major groups and individuals that can have a voice.

Simply protecting the Oceans is a death sentence for the seas of life. Even if completely successful now... a great multitude of Oceanic chemistry and ecosystems would still fail very soon.

We are now entering a time of historic environmental collapse that will shape human kind’s future and very survival. America must become the steward of the sea, repair damage and lead by example, instead of being the monster consumers we are.

I implore each of you to please become deeply involved in exploring how to change our path of eating fish, how we use energy and our waste production.

Over the next year I will be developing a new program, in collaboration with the Undersea Voyager Project, to investigate and report the condition of the seas and present methods and ideas for tangible change to repair the Dying Oceans.

Non-action is no longer a luxury we can afford. That time has passed.

I wish us all health, wisdom and courage.