When this came across our desk this morning all we had to say was Holy Cra%@!

Yes this is what you think it is, and no this has not been photoshopped. Researchers and fishermen in Thailand landed a simply monster freshwater stingray-what they did with it after this photo finish is anyone's guess.

After weeks of combing remote Southeast Asian rivers for giant freshwater stingrays—possibly the largest freshwater fish in the world—Hogan finally found the creature near a Thai city. To his surprise, she gave birth soon after capture. (Read full story.)

There are accounts of freshwater stingrays growing as large as 1,000 pounds (450 kilograms), which could make them the largest freshwater fish in the world, Hogan said. Hogan runs the National Geographic Society's Megafishes Project, an effort to document 20 or so freshwater giants.

The giant river rays are extremely difficult to catch, as they bury themselves in mud when hooked. They routinely break fishers' lines and bend finger-size hooks straight to escape capture.The ray's deadly barb, located at the base of its whiplike tail—and wrapped in a cloth in this picture—can easily puncture skin and bone.
Posted by Horizon Charters Guadalupe Cage Diving at 9:01 AM 1 comment: 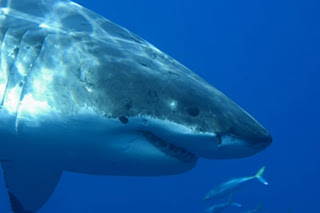 After the shocking and sad news from Solana Beach last week more news came in of another fatal attack-this time on a American surfer in Mexico.

The reaction on the US side to the unfortunate event in Solana was anything but vengeance for the shark. In fact the media and the California public, for the most part, understood the white sharks place in the oceans.

Not so on the Mexican side of the border. The shark attack at this site has been met with baited hooks and overall hysteria.

ACAPULCO -- Authorities used baited hooks to catch sharks today near a Mexican beach where a U.S. surfer was killed in an attack. Adrian Ruiz, 24, of San Francisco bled to death after being bitten on the thigh Monday while surfing off Troncones beach west of Acapulco.

Mexico's Navy and maritime authorities said they have strung about 200 yards of lines with baited hooks near the beach in an attempt to catch sharks that may be using the area as a feeding ground.

It is not clear what species was involved in Monday's attack, but Navy Cdr. Arturo Bernal said that helicopter overflights had sighted two great white sharks nearby.
Posted by Horizon Charters Guadalupe Cage Diving at 8:47 AM 1 comment: