FORT MYERS, Florida -- Jack Donlon, original founder of The Ultimate Shark Challenge Tournament Series, and his co-directors, Sean Paxton and Brooks Paxton II, have teamed up with renowned marine wildlife artist, scientist and conservationist Dr. Guy Harvey to present an innovative competitive event with $100,000 in cash and prizes that will serve as a model for sport fishing enthusiasts and marine conservationists.

The newly branded Guy Harvey Ultimate Shark Challenge Tournament Series will be a catch and release competition off the Southwest Florida coast – and much more. “For the first time, what we call a ‘love ‘em and leave ‘em’ shark tournament will be transformed into a true spectator sport,” said Sean Paxton. He and his brother, Brooks, known as the Shark Brothers, continued, “Our shared goal with Dr. Guy Harvey and Jack Donlon, is to give participants and viewers the most interactive, entertaining and educational shark-infested, multimedia spectacle found anywhere on the planet. This is not your grandfather’s fishing contest, but something completely new for a shark fishing tournament.”

Harvey, a long-time marine conservationist and founder of the Guy Harvey Ocean Foundation, said the tournament will increase global awareness of the important role that sharks play in the world’s oceans and our ecosystem. “The Guy Harvey Ultimate Shark Challenge Tournament Series will be a uniquely exciting event for participants, spectators and everyone who cares about the future of our oceans,” Guy Harvey said.

A total of 60 fishing teams will compete in the 2010 tournament, which will begin with three separate qualifying rounds next April and May. The series kicks off in Fort Myers Beach, Florida, on April 9 – 11, with additional stops in Marco Island and Sarasota. Twenty teams will compete in each round and the top four will qualify to compete in the two-day Grand Championship Finale on May 22-24. The finale and its sister event, Shark Fest –a family-friendly, educational and entertaining event for all ages – are sponsored by Mote Marine Laboratory and Aquarium and the Center for Shark Research in Sarasota.

"With the increasing demands facing our marine resources, we saw an opportunity to implement an alternative to traditional harvest formats that is not only environmentally sound, but also a viable tournament business model,” said Jack Donlon. “Through strategic alliances and with the support of like-minded corporations, such as Guy Harvey Inc., our vision will become a reality.”

Hueter noted that the staff from the Mote Center for Shark Research will oversee all scientific aspects of the tournament, including tagging operations. Selected sharks will be outfitted with satellite tags to track their movements after release. “This project will provide a breakthrough in collaborative research involving the marine scientific and recreational fishing communities,” he added. “By working together to develop a 21st century, conservation-oriented alternative, the Mote Center for Shark Research and tournament organizers will provide a national model, while changing public attitudes about responsible use of marine resources.”

Tournament organizers are planning a major television broadcast, which promises to deliver an adrenaline-fueled mix of extreme angling, cutting-edge research and wildlife management efforts. The show will be co-anchored by the Shark Brothers and Tipple, a marine biologist.

“In these days of technological connectivity, we will be able to put spectators right into the action, above and below the water,” said Tipple. “Our viewers will experience the sheer power and raw beauty of these animals, while seeing scientists and anglers working in concert to protect and understand their world.”

Limited sponsorship opportunities are still available and team entries are currently being accepted for review. For more details and additional contact information, visit: UltimateSharkChallenge.com and www.guyharveyoceanfoundation.org.

Born in Lippspringe, Germany in 1955, Harvey is a 10th generation Jamaican of English heritage. Growing up in Jamaica, Harvey spent many hours fishing and diving with his father. He was obsessed with the creatures of the sea and began drawing pictures of the many different fish he observed. From those early inspirations, Harvey’s gift of recreating marine life propelled him from Professor of Marine Biology to a wildlife artist and photographer. He initially opted for a scientific education, earning high honors in Marine Biology at Aberdeen University in Scotland in 1977. He continued his formal training at the University of West Indies, where he obtained a Doctorate in Fisheries Management. A vocal proponent of catch-and-release, Harvey generously donates artwork, time and funds for numerous institutions and conservation groups, including the Guy Harvey Research Institute established at Nova Southeastern University in 1999. In 2008, Harvey created the Guy Harvey Ocean Foundation, which supports marine conservation, research and education efforts. For additional information on Guy Harvey, visit www.GuyHarveyinc.com. 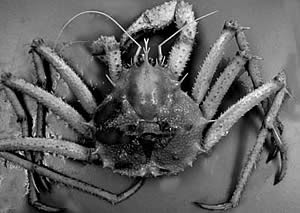 The place on the Internet for underwater news is Underwater Times.

They have been the leader in "breaking underwater news" from whale strandings to this weeks announcement of a new species of King Crab discovered by Sally Hall, a PhD student at the University of Southampton's School of Ocean and Earth Science (SOES).

As huge fans of crustaceans in all forms this is an exciting announcement. Unfortunately Lithodes galapagensis is found in deep water off the Galapagos and is much bigger than it's Alaskan cousins.

Can anyone say Deadliest Catch Galapagos?
Posted by Horizon Charters Guadalupe Cage Diving at 11:11 AM 5 comments:

Over at the Dive Around website John Natoli and Andy Green put together a great trip report about white shark diving in Neptune Islands, Australia.

The dive site "that started it all," still going strong decades later: