This blows my mind!

I've been diving with the great white sharks at Isla Guadalupe for 13 years now. Over time, I've come to marvel at the healing ability of the sharks, the mysteries of their migration, their distinctly different personalities and most of all, and this is what blows my mind, the fact that I can go to Guadalupe and know that I will see, not just any great white shark, but a particular individual great white shark.

Great white sharks are not resident to any given location, like say a clown fish, where you know that if you go to that particular spot, you're going to see that individual fish. The great white sharks that we see at Guadalupe are a highly migratory species that travel thousands of miles and typically return to the island each year. (every other year for adult females) 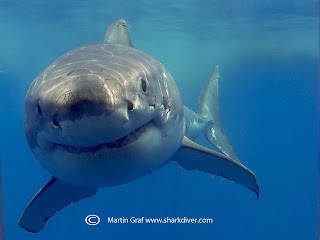 So here's the way I look at it. Say you live in a town or city, but I don't have your address. If I just come into your town at random and hang out, I may never run into you at all. With these sharks, I look at the great wide ocean and know that I can find "Bite Face," "Jaques" or "Bruce" and have been able to do so, consistently, for 13 years. Others, like our friend on the left, "Quetzalcoatl,"(OK I didn't name him) take a prolonged vacation of 8 years and return. "Where have you been, buddy?"

The fact that these world travelers (I mean, who doesn't want to vacation in Hawaii) return to Guadalupe each season makes this Island a very important place, not just for us shark divers, but for the species itself. I'm happy to say that Mexico has declared the Island a biosphere; roughly the equivalent of a national park in  the U.S.  I want to applaud Mexico for taking that step in protecting the Island and the great white sharks that visit there annually.

The Island itself is a marvel of its own. There are many native species of plants that only exist on Guadalupe Island and it is a nesting ground for many migratory birds like the Albatross.

Guadalupe is over 4000 feet high at it's highest spot and creates its own weather pattern. The island blocks the clouds and we usually have bright sunny skies above us, even if it's cloudy all around us.

The clouds cascading over the mountains create an amazing backdrop for our shark divers and make for some memorable pictures.


About Shark Diver. As a global leader in commercial shark diving and conservation initiatives Shark Diver has spent the past decade engaged for sharks around the world. Our blog highlights all aspects of both of these dynamic and shifting worlds. You can reach us directly at sharkoperations@gmail.com
Posted by Shark Diver at 2:39 PM 3 comments:

This is my 13th season at Isla Guadalupe, diving with and observing Great White Sharks. During this time I have learned a lot and found out that I now know a lot less about these sharks than I thought I knew when I started out, all these years ago. It is scary to think that Great White Sharks are an apex predator in  the Ocean and we know very little about them. 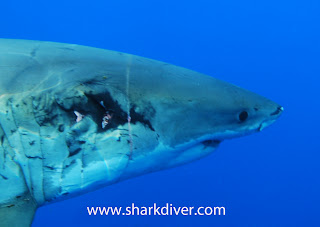 A few years ago I heard a quote by Dr. Peter Klimley, probably one of the most respected and knowledgeable scientists, when it come to Great White Sharks. "You want answers?! I got questions!" I thought that was a funny response at the time, but now I'm starting to understand what he meant by that. For every answer I get, a few more questions arise and so I feel like I know less and less as I'm becoming aware of all the things I don't know.

Take for example how sharks heal. The first  picture is of "Chuggy" last year, after he got bit by another shark. He was swimming around with this nasty gash on  his head, like he did not have a care in the world. I have to admit that I didn't think much of his chances to survive this bite and thought I'd never see him again. 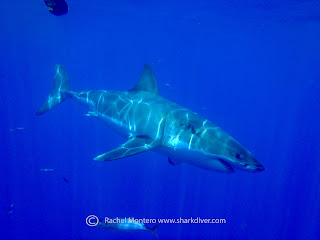 The second picture was taken just last week. Look at the amazing difference! There are no veterinarians, no surgeries or stitches and yet he looks like he's healing just fine. I'm blown away by their ability to survive injuries that would kill just about any other animal and the weirdest thing is, these nasty injuries don't even seem to bother them all that much. They swim by like nothing happened, with no discernible change in behavior or activity. They are not "limping" around, they keep swimming around normally, acting exactly like they did the day before.


About Shark Diver. As a global leader in commercial shark diving and conservation initiatives Shark Diver has spent the past decade engaged for sharks around the world. Our blog highlights all aspects of both of these dynamic and shifting worlds. You can reach us directly at sharkoperations@gmail.com.
Posted by Martin Graf at 10:53 AM 5 comments:

Our 2013 season at Guadalupe has been awesome so far. On our first 3 trips we saw a total of 18 different sharks we have seen in previous years, along with at least 5 new ones. We have also seen 10 complete breaches! Who says they only breach in  South Africa?!

Our divers are having a blast! Brian Arnone, a newly minted Shark Diver sent us a picture from his recent trip.

On August 16th I spotted a shark that I didn't recognize, but looked strangely familiar. After looking through our Shark ID database  I found out that it was #56 Quetzalcoatl who had not been seen since 2005. It's awesome to find a long lost friend, back at Isla Guadalupe!

On August 25th we spotted #27 Squire, another shark that was absent for the last 3 years. Where have they been? We don't know. It always worries me, when one of our regulars, like Shredder last year, is missing. To find that some sharks are coming back after an absence of many years, gives me hope that he, along with many others are still out there and doing well.

I hope you can join us on one of our expeditions and experience what if feels like when you  come face to face with these magnificent creatures and have them look you straight into the eyes.

About Shark Diver. As a global leader in commercial shark diving and conservation initiatives Shark Diver has spent the past decade engaged for sharks around the world. Our blog highlights all aspects of both of these dynamic and shifting worlds. You can reach us directly at sharkoperations@gmail.com.
Posted by Martin Graf at 11:28 AM No comments:

Have a real Shark Week! 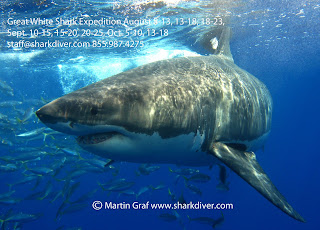 Just as we are about to start our season, diving with the Great White Sharks at Isla Guadalupe, CNN has published an article, listing the best places to swim with sharks.

Not surprisingly, Guadalupe is listed as the place to see Great White Sharks and Shark Diver as the company to take you there.

Also listed for the best place to dive with Bull Sharks is Fiji, where Shark Diver will be going for 2 trips May 2nd 2014 and May 9th 2014.to dive with our friends at Bequa Adventure Divers

Thank you CNN! We think you got this story right!

About Shark Diver. As a global leader in commercial shark diving and conservation initiatives Shark Diver has spent the past decade engaged for sharks around the world. Our blog highlights all aspects of both of these dynamic and shifting worlds. You can reach us directly at staff@sharkdiver.com
Posted by Martin Graf at 6:35 PM 1 comment: