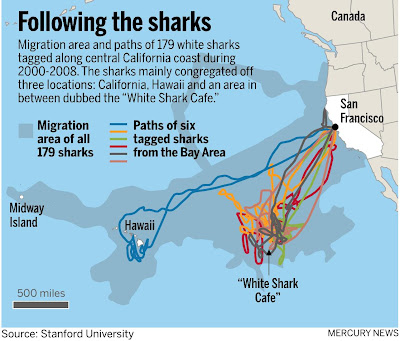 From 2000-8 a team of researchers from U.C Davis and Stanford have been tagging white sharks in and around the Farallons and Point Reyes Seashore.

The very in depth story was covered today in the Mercury News and for white shark folks is a must read.

The other bombshell, not mentioned in this article was additional data showing Farallons white sharks off the coasts of Oahu's North Shore.

Confirmation of one of the commercial shark diving industries greatest white shark encounters back in 2007.
Posted by Horizon Charters Guadalupe Cage Diving at 7:34 AM No comments: