Shark Free Marinas, Bahamas It Starts With "One" 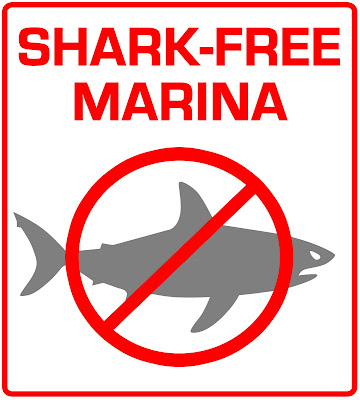 We are proud to announce the first of 10 marinas in the Bahamas who have joined the Shark Free Marinas Initiative saying "no" to shark kills by educating the public to sustainable catch and release fishing.

Our goal is to have these signs and public education material at a minimum of 30 marinas in the Bahamas. Based on the initial response thus far it looks like we might just meet this goal.

For now please join us in thanking and supporting the Bimini Sands Resort Marina who, with the help of Katie Grudecki, have realized the need for sustainable shark management in the Bahamas and now stand as educational point guards against the taking of sharks for "images and weigh ins".

As we have long said in our industry and with shark conservation efforts worldwide:

Everything begins with "One"
Posted by Horizon Charters Guadalupe Cage Diving at 9:18 AM 1 comment:

It's Official-Chumming Banned at the Farallones 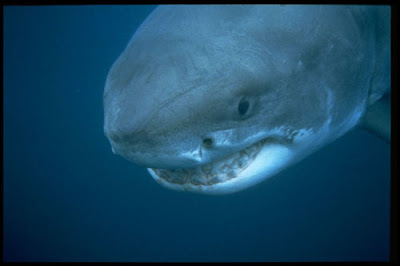 This mornings news is old news for one of the original white shark diving sites on the Pacific West coast. These "new" rules and regulations have been in the works for many years and came as little surprise to the few operations still taking divers to this site:

Under the extensive new rules, federal officials also forbid attracting seabirds by tossing food in the water, as well as other kinds of sea life. Tour boats will have to remain a respectful 55 yards away (length of a football field) when white sharks feed on elephant seals, as they go there to do. That'll make it harder to get a close-up shot, but managers say that whites have been seen abandoning a kill when boats venture too close.

Editors Note: The Farallones as a stand alone shark site was once a good operations site. That was in the days when the Farallones was the only white shark dive site aside from South Africa and Australia. Back prior to rules and regulations operators could tow decoys prompting similar aerial attacks to those seen at Dyer Island in South Africa. That is not the case today. With the opening of Isla Guadalupe, MX and it's guaranteed shark sightings divers who experience the Farallones are often extremely disappointed. This prompts a conversation about the ongoing viability of this site for commercial shark diving operations. The market will determine how long this site stays in business. Our guess is not much longer. Going into 2009-10 adventure travelers will be running to value, in the world of wild animal encounters that means encountering animals.
Posted by Horizon Charters Guadalupe Cage Diving at 8:26 AM No comments: