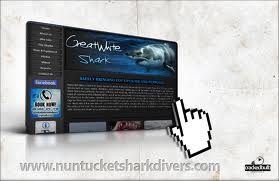 It's been a long time coming but through it all Captain Bryce Rohrer has maintained a steady head of steam and enthusiasm you only find from truly dedicated shark diving folks.

The end result is Nantucket Shark Divers the place to be for shark diving in the USA off the East coast in the summer and fall:

Nantucket Island is home to many species of sharks during the warmer months of the year. From June through October species such as blues, makos, threshers, great whites and basking sharks call the waters off the island home. Nantucket Shark Divers has perfected the game of finding and interacting with these animals both above and below the water. With years of experience and a flawless safety record we are able provide novice and experienced divers alike a world class day of adventure on the water. Whether you are a professional looking for photographs or a beginner looking to get in the cage we have over 10 years of experience to make sure you get as much out of the day as possible. Our aim is to provide our clients with a first rate safe and successful wildlife experience. We also offer shark and whale watch viewing trips from the safety of the boat. For an experience you won't forget book a trip with us in search of sharks and witness nature at it’s peak. Sharks and whales are guaranteed on every trip.

We wish these guys the very best and good luck with the white shark hunt that kicks off in a few months from now, make the industry proud guys!

Diane MacEachern Firing on all Cylinders?

As much as we dislike the current trend within the the shark conservation community to fabricate facts, inflate research numbers, and simplify complex issues down to the level of single celled organisms, we're no fans of those who take on the commercial shark diving industry either.

Enter Diane MacEachern, a blogger who dropped a stinker of an article onto the Internet this week with all the grace and finesse of a Hakapik wielding sealer on a Canadian ice flow.

The article is called Shark Cage Diving: Helping or Hurting? and it's filled to the brim with assumptions, non facts, and a quote from a guy who's selling a book:

“In general, people are intruding upon and disturbing wild animals far too much. We need to leave them alone and in peace far more than we do. Shark cage diving is a good example of how we are messing around with great white sharks too much, habituating them to people, having them associate chum (bait) with people, and drawing them to locations where surfers and divers are recreating.“

Yes, yes, we have heard this all before, but has anyone heard of the great pro-industry research data into white shark habituation from Australia?  How about Isla Guadalupe?

The fact is articles like these, written by self avowed sharks divers (Diane's total shark experience was a fetid pool with a lone Nurse shark in it) do a lot of harm to an industry that we recently blogged about. One that suffers, three decades on, from an almost complete lack of regional and government/tourism support.

Globally our industry generates tens of millions of dollars and educates tens of thousands of divers, and remains one of the safest adventure sport industries out there. That's a fact. The rest of it, the assumptions that regionally our industry is responsible for shark attacks on surfers, divers, and little kids on inflatable dinosaurs is just, "pull it out of your ass media meat grinder material". There's nothing to back any of it up, not a single paper, no data, just good old fashioned hysteria.

Unfortunately it plays, and plays well, especially when Nurse shark diving experts, afraid of attacks, decide to get busy with blogs.

What our industry does not do well is handle mainstream media output. In terms of an international body we handle the few ridiculous industry videos, idiotic images, and industry/conservation messaging with the same care and preparation that a five year old exhibits with a set of overlarge paint brushes, three color paint, and small black and white images asking one to, "paint in the lines".

We need to do better.

In terms of a global industry, after 30 years, it is high time to create an industry body. One that works with regional government and tourism members for support, action, and one that handles the global media output. A few images and video, some shot years ago, are still being used today to malign an entire industry worldwide. These images appear for simplistic reasons, and no one is ever held accountable. But they do damage none the less.

It's an interesting thought, a global commercial shark diving body, and a bold vision, we wonder if anyone is up for a challenge?
Posted by Horizon Charters Guadalupe Cage Diving at 9:33 AM No comments: