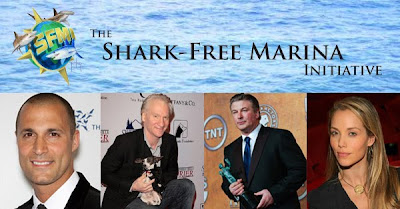 Ecorazzi got the scoop on the Shark-Free Marinas this week with an expose on star power
endorsements for this unique conservation concept:

What do Nigel Barker, Elizabeth Berkley, Alec Baldwin and Bill Maher have in common? They each support the Shark-Free Marina Initiative!

Here’s the deal: Sharks are disappearing from the world’s oceans at a devastating rate! To help combat this colossal problem, The Guy Harvey Ocean Foundation and The Humane Society of the United States have teamed up with the Shark-Free Marina Initiative (SFMI) to help launch a massive new campaign!

Over the next few months, SFMI will be reaching out to marinas across the world and asking them to get involved by prohibiting sharks from being landed at their dock. So far almost 83 marinas have signed up, and the number is growing each day.

Author and fashion photographer Nigel Barker is a strong supporter of the campaign and says, “There are many good fishermen out there who respect the oceans and know that in order to preserve their way of life for future generations we all need to be more aware of our actions and the results they may cause.”

“Ecorazzi has played an important role in educating the public about the perilous state of sharks,” says Operations Director Patricia Ragan. “We encourage Ecorazzi readers to contact marinas they know to join the Shark Free Marina Initiative. Together, we can save tens of thousands of sharks!”

For more information on the campaign, check out SharkFreeMarinas.com

What DNA tells us about the shark fin trade 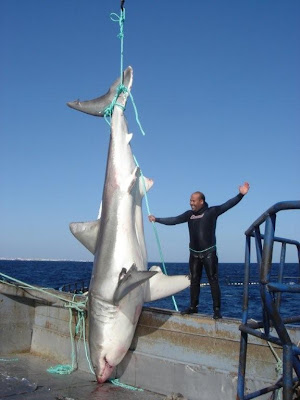 In case you missed it the Vancouver Sun in conjunction with Bob Hanner, associate director for the Canadian Barcode of Life, recently took some sharks fin from a series of markets in Vancouver and ran a DNA profile on them.

The results were interesting to say the least.

Fine article, great reporting, and a wake up call.

As we have long said, to combat the global shark fin trade you need to understand it first. One of those critical first steps is not only sampling sharks fin from major trading centers over time, but also analysing the trade routes, distribution centers, online trade, and species connection.

This first step take in Vancouver could also be done in San Francisco, L.A, Las Vegas, just as efficiently.

Any takers?
Posted by Horizon Charters Guadalupe Cage Diving at 12:16 PM No comments: 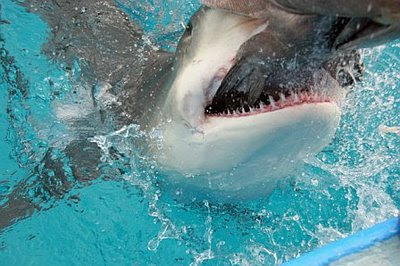 One of the primary functions of commercial shark diving operators worldwide is to inform and educate the public to the positive side of sharks.

Not everyone does this but when they do good media always follows:

HENNIE OTTO: We've got some scientific evidence that chumming doesn't really affect the behaviour of the shark being- making them more accustomed to boats and people, etc - or making them more prone to attack human beings.

HENNIE OTTO: If the bait line's been pulled away as the animal moves in and that's negative-negative conditioning, if you want to call it that. Um, there's proof that the sharks have been habituated about what we're doing. As soon as you see that they don't get the bait, they usually just swim off. And you rely on constantly new animals coming through on a regular basis for the divers to see them in the cage.

ANDREW GEOGHEGAN: How important is this as far as the tourism's concerned, to actually educate the people about the shark.

Complete Story.
Posted by Horizon Charters Guadalupe Cage Diving at 9:19 AM No comments: