Island of The Great White Shark-Documentary 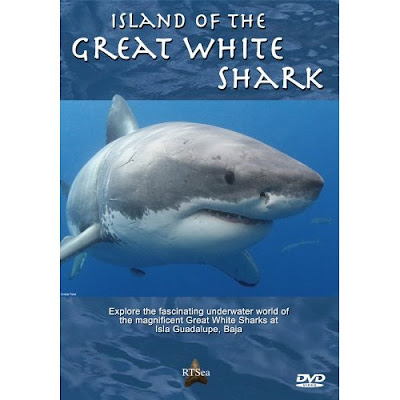 Richard Theiss producer of the documentary Island of the Great White Shark will be at the Birch Aquarium (Scripps) tomorrow night screening his new film to an almost sold out audience.

For the past few days he's been on television talking about his film. Tomorrow morning he'll be on Fox News 5 in San Diego.

You can find his recent interviews with:

Always a passionate advocate for sharks and the oceans. His documentary remains one of the few in depth looks into the secret world of great white shark without the hype.
Posted by Horizon Charters Guadalupe Cage Diving at 3:09 PM No comments:

We got the following email last month and sat on it a while. In the world of shark diving and on site protection from sharks there's a growing group of inventors and existing products out there. We have tested most of them from rare earth magnets, to Killer Whale sounds over the years.

This latest one need may need further testing...maybe Tiger Beach?

I discovered your site through a link from sharkdivers.blogspot.com.
It's a great website quite with brilliant content. As true shark experts I'd love to know what you think of my product, it's a mask strap that can help you avoid a shark attack.

It might sound bizarre but it is based on scientific evidence, there's a link to this 'evidence' below. The idea was inspired by a report I read about Tiger attacks in the jungles of India. My website was launched last week and I'm really excited about it as I've been obsessed with sharks since a kid. Any feedback would be greatly appreciated.

P.S. A product for surfers will be out next week based on the same principles.
Posted by Horizon Charters Guadalupe Cage Diving at 2:45 PM No comments:

White Shark Scoop-Swim At Your Own Risk

The fine folks over the the Swim At Your Own Risk Blog got the scoop on another shark autopsy in New Zealand this week with biologist Clinton Duffy presiding.

Note:The pro drumline and net propaganda in the back of this image. Worldwide this 1950's solution to shark management is killing sharks at an unprecedented rate and is a major agenda item for pro shark conservation efforts:

If you happen to be in New Zealand this week, the Auckland Museum will be performing a public autopsy on a 9 ft great white shark on Thursday, January 8, in hopes to raise shark awareness.

The autopsy, or necropsy as it’s officially known, will be carried out by Clinton Duffy of the Department of Conservation Marine Conservation Section and Tom Trnski, Marine Curator of the Auckland Museum.

The operation will examine the shark’s stomach contents, as well as take measurements of organs. The public are invited to view the autopsy and come face to face with the shark from 11am-1pm in the loading dock at the south-eastern corner of the Museum.

Posted by Horizon Charters Guadalupe Cage Diving at 9:00 AM 3 comments: