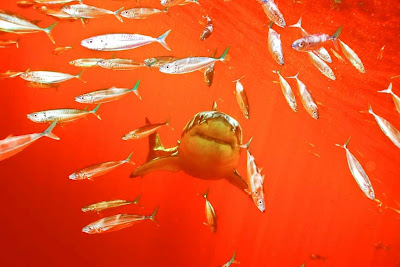 This month Oceans Magazine featured Shark Diver and a first encounter story told by one of our shark divers Steve Hutchings.


I saw Jaws when I was eleven, after which I was so petrified of the water I wouldn't go in the bathtub for a year. This is one of many thoughts swimming through my head as I step off the stern of the MV Islander and onto the top of a cage suspended three meters below the surface of shark infested waters. Our dive master, Luke Tipple, hands my mouthpiece to me, from which I'll be breathing surface-supplied air. I insert the mouthpiece and grab my underwater camera. With a deep breath, I slide into the cage below.

I share the cage with Jim, an American scuba instructor, and Leigh and Lisa, an English couple on a working holiday. Although I swam with reef sharks in Thailand three years previous, we're all rookie shark divers in these waters, having endured several months of comments like "Shark Bait"!? from our peers, united by our desire, and each of us having plopped down three thousand U.S. dollars with San Diego based Shark Diver to experience the oft-vilified, yet enigmatic great white shark.

We move around the cage for the first five minutes, searching for any signs of a great white. Scores of mackerel cloud our view, attracted to the two tunas that the crew set out to attract the sharks. Then, amidst the fish below our cage, I see a shark. He's smaller than I anticipated. About two meters long, he propels himself with slow, side-to-side movements of his tail. I watch, mesmerized as he disappears from sight.

Several more sharks appear sporadically over the next ten minutes before disappearing for half an hour. We begin to think we've seen our last shark on this dive. Luke taps the other cage with a metal bar, indicating the end of the hour long dive. I watch as the divers in the other cage ascend and wait for a new set of four divers to replace them. Nothing. I climb out of our cage, and when I reach the surface, Luke, in his Australian accent, says, "Steve, mate, do me a favor and go back under. There are sharks all around you and it's too dangerous to come up."

I panic, thinking there are too many sharks around the boat for our crew to handle and that the situation has deteriorated to dangerous. I let go of the ladder and fall back into the cage, dragged down by the forty pound diving belt, and land on my rear end. I'm still struggling to get off my backside, when a large female shark swims past our cage, two meters in front of us. The other three divers clamor to get their cameras in position. I'm still trying to get on my feet. That's when I see another shark, swimming directly toward me. My heart races as his snout gets bigger, and closer. Just as I'm convinced he's going to attack our cage, at less than a meter away, he veers to his right and swims past me, and I notice something about him that I've never seen in any pictures of a great white - a purple ring around his pupil. We stare at each other, eye to eye, until he's past our cage and disappears into the background.

I just made eye contact with a great white shark.

Such was our first dive at Guadalupe Island, off Baja California, about three hundred kilometers south of San Diego, on a five day, live-aboard diving expedition arranged by Shark Diver. Great whites congregate here, off Guadalupe, between August and December each year. The sharks seen here are resident sharks. Much like the resident orcas off Vancouver Island, marine biologists have named about sixty of the estimated two hundred sharks. Chica, Bruce, and the ever popular Shredder are some of the well-known sharks at Guadalupe, the latter being a favorite of many divers for his consistency and his aggressive attitude. On a subsequent dive he veered towards a male diver in the cage, who retreated backward. A female diver later recounted that she watched Shredder's pupil following the male diver as he swam past the cage, seemingly pleased that he intimidated the man.

I guess boys will be boys, no matter what the species.

Editors Note: Shark Diver takes interactions with great whites seriously. We always defer to the animals. Once in a while when the situation is deemed necessary by our dive operations manager we keep divers in cages when it is time for rotation. Distracting the deck crew when 5-7 animals are on site and "hot" is a recipe for disaster, as such such we have a standard policy of animals first.

Shark Diver remains an industry leader of safe shark encounters with a 100% safety record, no sharks in cages, no animals hurt. It's an industry record we're proud of.
Posted by Horizon Charters Guadalupe Cage Diving at 10:43 AM 2 comments: