"Megamouth" in a Red Bean Sauce

One of the most tragic media bytes of all time was the Hindenburg crash in Lakehurst, New Jersey, 1937. The reporter on site all but dissolved live, on nationwide radio, crying out "Oh, the humanity!"

You kind of get that same feeling when an extremely rare and valuable Megamouth shark was recently caught...and then carved up and eaten by fishermen from a town in the Philippines. The environmental conservation group WWF reported this unusual "Gastronomic Hindenburg Event" this month.

So rare are Megamouth shark sightings that each find is given a number -- this one, caught by fishermen from the coastal town of Donsol (also known for whale shark tourism), was only the 41st ever seen or captured in the world.

Elson Aca, a Donsol WWF representative, said this rarest of sharks was butchered and its meat sauteed in coconut milk as a local delicacy, against the organization's advice. Turns out these sharks are just plain tasty.

Since we do not have video of the tragic shark feeding event please review the following video from 1937. "Oh, the humanity indeed!" 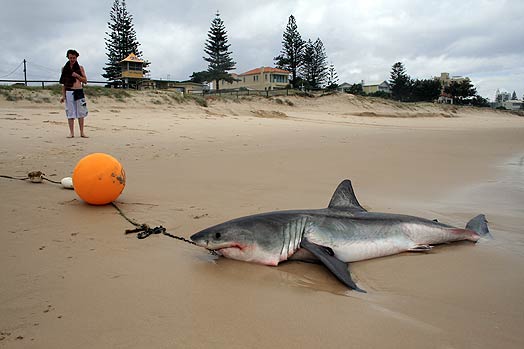 A few months ago we posted several stories about the antiquated shark killing system from the 1960's still in use on some beaches in Australia today.

The images of a dead sub adult white shark to us was appalling.

Better news today as a new tagging and early warning system goes into place allowing both researchers and ocean users a real time assessment of predatory threats without killing the animals:

A monitoring system which tracks White Pointer sharks off the coast of Perth could soon be used to warn swimmers if sharks are nearby. A network of acoustic receivers was deployed off metropolitan beaches last year to monitor 100 tagged sharks.

The Department of Fisheries says the aim of the program is to learn more about the behaviour and movement of sharks. Research scientist Rory McAuley says the system could also become a public safety tool.

"We'll be able to provide alerts to public safety agencies and officers when a tagged shark does turn up close to a populated beach," he said. 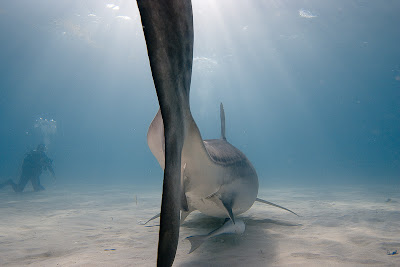 A four year study on the movement patterns of Tiger sharks in Hawaii has once again surprised the CW folks - opening a new and better understanding of these remarkable critters.

Shark researcher Carl Meyer, a biologist with the Hawai'i Institute for Marine Biology says these animals are not the territorial hunters once thought. Rather, these animals are pelagic wanderers often traveling great distances to find and ambush prey items. Kinda like those 40 lost years Moses spent wandering around the deserts. Except Moses never brought down a sickly Humpback whale calf. We digress.

Great study and better news coming out of Hawaii where local shark diving operators need data like this to bolster claims about chumming and animal behavior. Now if the folks over there can put this data together.
Posted by Horizon Charters Guadalupe Cage Diving at 8:01 AM No comments: 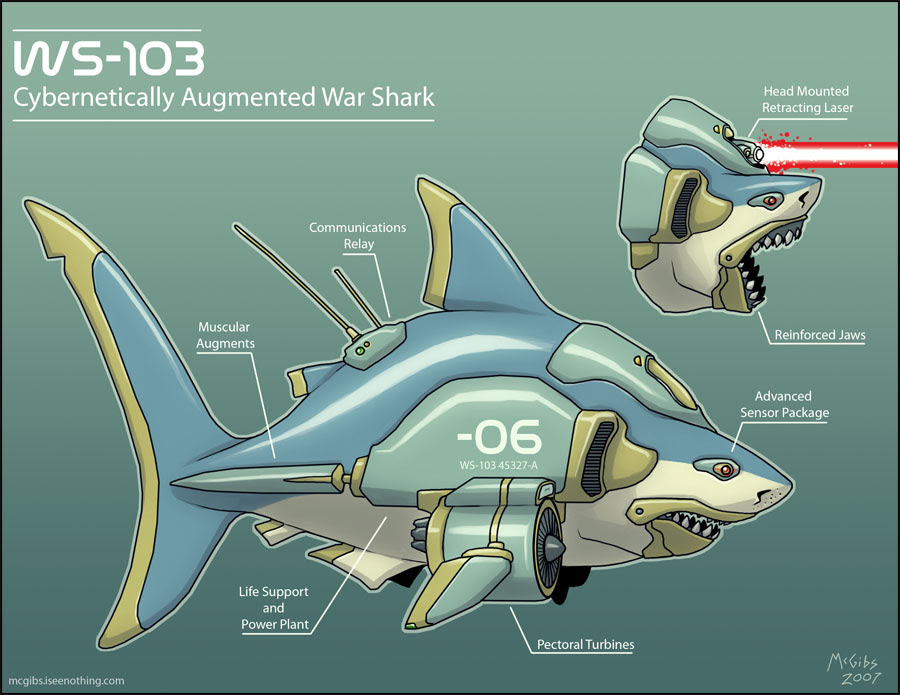 DARPA is the military's design and development wing and they are designing "guided sharks" according to the BBC:

Pentagon scientists are planning to turn sharks into "stealth spies" capable of tracking vessels undetected, a British magazine has reported.


They want to remotely control the sharks by implanting electrodes in their brains, The New Scientist says.

It says the aim is "to exploit sharks' natural ability to glide through the water, sense delicate electrical gradients and follow chemical trails".

The unusual project was unveiled last week in Hawaii, it says.

The research is being funded by the Pentagon's Defence Advanced Research Projects Agency (DARPA), according to the magazine.

It aims to build on latest developments in brain implant technology which has already seen scientists controlling the movements of fish, rats and monkeys.

"Neural implants consists of a series of electrodes that are embedded into the animal's brain, which can then be used to stimulate various functional areas," the magazine says.

It says such devices are already being used by scientists at Boston University to "steer" a spiny dogfish in a fish tank.

The next step for the Pentagon scientists will be the release of blue sharks with similar devices into the ocean off the coast of Florida.

As radio signals will not penetrate the sea, communications with the animals will be made by sonar.

The US navy has acoustic signalling towers capable of sending sonar signals to a shark up to 300km (187 miles) away, the magazine says.

It says the scientists will be particularly interested in the animals' health during the tests.

"As wild predators, it is very easy to exhaust them, and this will place strict limits on how long the researchers can control their movements in any one session without harming them.

"Despite this limitation, though, remote-controlled sharks do have advantages that robotic underwater surveillance vehicles just cannot match: they are silent, and they power themselves," the magazine says.

The project was discussed at the 2006 Ocean Sciences Meeting of the American Geophysical Union in Honolulu, Hawaii.

Posted by Horizon Charters Guadalupe Cage Diving at 6:39 AM 1 comment: