"I ain't never seen so many gators in my life."

Guy Harvey gets some unintended brand recognition in this remarkable video from Georgia this week.

Posted by Horizon Charters Guadalupe Cage Diving at 9:32 AM No comments: 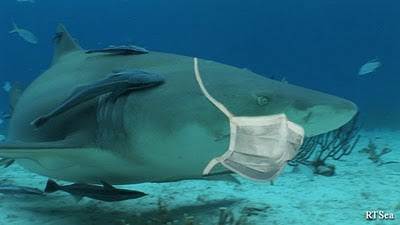 RTSea has an interesting take on sharks this week. Drug resistant bacteria?

Could be another reason not to eat these critters.

"Drugs given to humans could simply be excreted and eventually find their way into the ocean. Or bacteria in humans could acquire the resistance, be excreted, and then colonize fish that sharks eat, or the sharks, themselves. Some antibiotics are routinely dumped into aquaculture to help prevent infections -- that could be a source for some of the resistance."

Complete post.
Posted by Horizon Charters Guadalupe Cage Diving at 7:41 AM No comments: 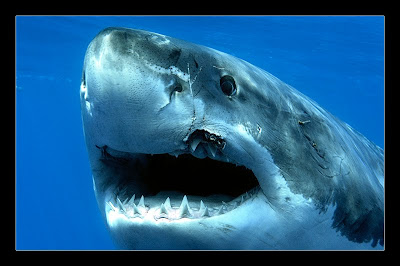 Many years ago I wrote an Op Ed for a local San Diego paper titled "When Filmmakers Attack."

The article, written five years ago, was way ahead of its time looking into the the ongoing production slide at Isla Guadalupe, Mexico.

In the ensuing 5 years since then at Guadalupe many productions have sought lowest common denominator anti-shark programming with no end in sight. Note to the underwater cameraman who shot this garbage, and you call yourself pro-shark? Waddaya, new?

Chris Palmer knows of what he speaks as the author of the book "Shooting in the Wild: An Insider's Account of Making Movies in the Animal Kingdom" he has the insiders eye to wild animal productions.

With the obvious value of these productions to behemoths like Discovery Networks there's little chance we'll see substantial changes anytime soon, but its nice to have voices like Chris Palmer adding weight and mainstream media to the discussion.


Kudos.
Posted by Horizon Charters Guadalupe Cage Diving at 6:59 AM No comments: