Can Magnets Really Save Sharks? 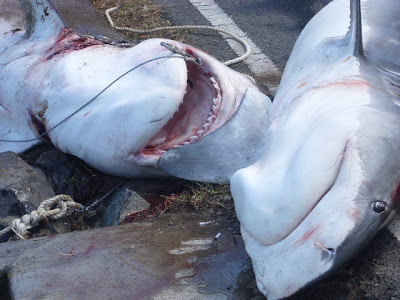 There is an interesting article on BBC news about rare earth magnets repelling sharks and preventing attacks.

Having observed Great White Sharks for the last 10 years at Isla Guadalupe, I have a couple of  questions. A lot of times a shark is initially repelled by something, but after the initial "flee" reaction and the realization that it is not something trying to attack it, the shark is actually attracted to it. I've observed many, specially young sharks, that are initially afraid of the shark cages, but after a while, come back and start investigating.

I'm not saying this is the case here, but it certainly needs to be investigated.

For me, the more interesting part in the article deals with the reduction of shark by-catch by the long line fishermen!

"We realized we could magnetize the fishing hook, and coat it with a rare earth metal," he says. "It looks just like a regular hook. Several countries are now testing his so-called SMART hooks to see if they work. Some tests show a 60 to 70 per cent reduction in the number of sharks caught."

If this research proves correct, I wonder if this would be cost effective. Would the long line fishermen actually buy those hooks? Food for thought.

About Shark Diver. As a global leader in commercial shark diving and conservation initiatives Shark Diver has spent the past decade engaged for sharks around the world. Our blog highlights all aspects of both of these dynamic and shifting worlds. You can reach us directly at sharkcrew@gmail.com.
Posted by Martin Graf at 11:18 AM No comments: