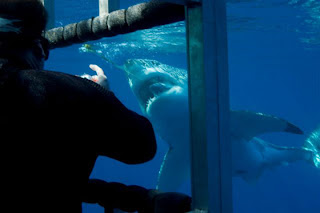 It's not all fun and games when you're a Shark Diver.

Case in point this slightly disgusting video from 2004.

Let us "set the scene". It's late November and we have three big white sharks swinging at the hang baits at the back deck- complete with two jam packed dive cages full of otherwise excited divers....that's when all hell broke loose.

Suddenly, this large 15 foot male lets loose an incredible stream of shark excrement out his tail end. Up until that exact point in time no one in the history of shark diving had ever filmed a white shark doing something like this.

Anyway, the story ending is the best part. Diver Jason Sullivan who shot the whole thing stays in the cage as the current moves this yellow "ort-cloud" of poo all over the guy. He comes up to the surface with with worlds biggest grin and says this "Dude, a white shark just crapped all over me, and I got it on film...cool", he then proceeds to get back in the cage and does not come out for the rest of the day:

O.K, you're probably wondering why in Neptunes Great Sea we would ever feature a T-shirt company here at Underwater Thrills: Diving With Sharks.

They're cool, we said it first. If you're not sporting a Dive Ninja T after your next shark encounter you ain't no kind of diver. And do not let the the £20 price tag sway you from owning a piece of dive history.

When you do buy one, and you will, tell 'em, Shark Diver sent you.
Posted by Horizon Charters Guadalupe Cage Diving at 6:04 PM No comments:

It's February, 2008. For divers who absolutely need to see sharks this time of year the big question is where to go in February?

Fortunately for you, Shark Diver, there's a small island chain in Mexico (where else) called the Revillagigedos-(just try saying this name correctly, we dare you) that is stuffed with more Shark, Ray, and Manta encounters than you can shake a regulator at. The crew of the long range expedition dive vessel Nautilus Explorer can take you there.

This is what diving should be: