We say hello to 12 soon-to-be newly minted shark divers at the docks of H and M Landing tonight as they board the MV Horizon with Shark Diver for another white shark adventure to the island.

While some of the shark diving operators have finished for the season we're still going strong and our divers, many who booked last year at this time, cannot wait to get the adventure going.

We'll post more trip reports from shark divers as they come in. 2010 was a record text book season both in terms of sightings (double digit days) and operational safety and success.

Kudos to Martin Graf and his entire back deck team for many hours of hard work, and an amazing season so far, cannot wait until Novembers trips!
Posted by Horizon Charters Guadalupe Cage Diving at 8:22 PM No comments:

Beginning in October, the Shark-Free Marina Initiative will embark on it’s largest membership campaign throughout the United States and the Bahamas in order to save sharks.

Sharks are disappearing from our oceans at an alarming rate. Therefore, the Guy Harvey Ocean Foundation, The Humane Society of the United States, and various other organizations have teamed up with the Shark-Free Marina Initiative (SFMI) for a singular, historic purpose: to reduce worldwide shark mortality. SFMI certifies sport fishing and resort marinas as ‘Shark-Free’ thereby prohibiting any shark from being landed at their dock.

“SFMI works directly with the recreational and commercial fishing community to send a clear message,” says Luke Tipple, Managing Director and SFMI founder. “As shark populations are decimated on a global scale we as a species are obligated to pay attention and reduce our wasteful destruction of these incredibly important animals.”

Some very important and influential celebrity spokespeople are also teaming up with SFMI. Fashion photographer and America’s Next Top Model judge Nigel Barker feels strongly that we all have to speak out for sharks. “There are many good fishermen out there who respect the oceans and know that in order to preserve their way of life for future generations we all need to be more aware of our actions and the results they may cause.”

Slash, legendary guitarist and founding member of Guns & Roses and Velvet Revolver adds, “It is important to me as a father and concerned human being, that we do all we can to address the wasteful destruction of these amazing and important animals. We must ensure that sharks are around for future generations.”

Other stars to support the initiative include Alec Baldwin, Elizabeth Berkley and Bill Maher. To read what they have to say, click here.

Shark-Free Marinas has a message that is being heard worldwide. Tipple summarizes “Shark overfishing is a serious problem which threatens the very health of our oceans. It’s time to take a stand and set an example of sensible conservation that can be globally respected and repeated. There is a solution, and it starts at our marinas.”

Find out more at www.SharkFreeMarinas.com
Posted by Horizon Charters Guadalupe Cage Diving at 4:43 PM No comments:

Down in South Africa, they go for sharks with rod and line - real hammerheads too - and the Durban fishers use whale meat as bait - C/U of two men winding a fishing line around a chunk of meat. M/S of man in tiny boat being given the chunk of meat and an oar. L/S of him paddling out to sea - looks very precarious.

Low angle shot of group of fishermen on the quayside. Children watch. C/U of man lying down on the quayside having a sleep with his hat over his eyes. He has a fishing rod by his legs. M/S of men and women leaning over a sea wall - some fish. C/U of man reeling in what is probably a big fish. M/S of the fish - shark - which he is reeling in. C/U of a penguin standing on a rock. M/S of crowd admiring the man's catch. It is a hammerhead shark which writhes on the ground. Looks pretty bloody. A dog sniffs around it and tries to bite its tail.

The Demons of Durban - Part 2 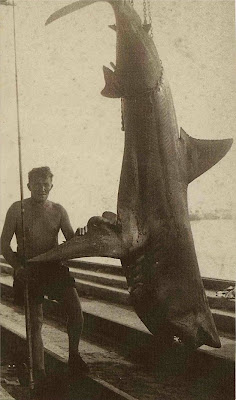 The Demons of Durban Part Two

The anglers would load up their newly acquired whale meat and head southward on the railway that lead to the end of Durban's south jetty, with hopes of taming these beasts that constantly patrolled the harbor. But the tackle and techniques these anglers choose to use were somewhat primitive, even for the day and age they were stalking these sharks. The tackle which was most commonly used to try to tame these giants from the rock laden jetty typically consisted of a wooden Scarborough reel, with rods constructed from locally grown bamboo. These outfits usually held anywhere from 600-800 meters of Flax line, which was then proceeded by a 30 meter length of wire or cable trace, that normally would have a dog chain link somewhere along the leader that was closer to the bait and homemade sinker. To deploy these baits off the jetty and into the shipping channel, one angler would typically hold the rod, while another angler would strip anywhere from 20-40 meters of line off the spool of the Scarborough reel, and lie it flat on the surface of the jetty.

David Diley Against All Odds 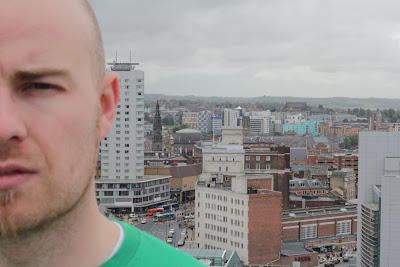 A while back when Da Shark discovered David Diley and his remarkable take on a hot button issue for our industry, I was impressed.

David produced a clear and incisive understanding of shark chumming and baiting.

His Op-Ed, from a non industry member, made David a rare commodity.

Rarer still as David has gone on to follow his ultimate dream, "From Office to Ocean," one mans voyage into the world of sharks and conservation.

David is, like so many within our community, following his dream with no funds, having gone deeply into debt to produce the following teaser. Like his Op-Ed it shows a depth of understanding and natural filmmakers talent that cannot be ignored.

This is great stuff, and deserving of funding. We support it and will support David as he continues forward. Raw talent needs help and in the end sharks ultimately benefit.