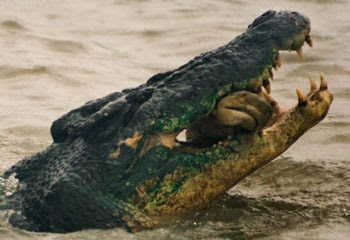 "We are the only laboratory in the region studying the endemic Leprechaun Shark (Triaenodon Leprechus) and this croc finished off the lot of them", said Ann Roman spokesperson for the lab.

The Leprechaun shark is a native freshwater shark similar to the bull shark and is named after a green bio luminescent gel it excretes. The species was discovered in the Wildman River basin in 1936. Researchers in Australia think the bio luminescent gel might have commercial applications and have been studying this shark at the Wildman River lab for the past four years. It is the only known shark species to excrete a gel.

"When we arrived at the lab this morning we noticed a thrashing around in the 4 hectare pen, that's when this great huge croc reared up with a 1 meter shark in its jaws. By the time we got a team in there the crocs mouth was stained green and it had finished off most of our control group. Given how rare the Leprechaun shark is in Australia, this is a real set back".

Efforts to remove the massive croc by Department of Fish and Resources personnel have met with little success.

The following Underwater Onion was brought to you by Shark Diver. Sometimes the "pot of gold" at the end of a story remains elusive, happy St. Patricks Day;)
Posted by Horizon Charters Guadalupe Cage Diving at 1:52 PM 2 comments: