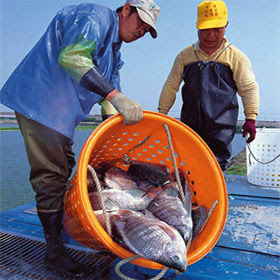 The most popular farmed fish species in Taiwan may soon help save endangered sharks.

It turns out that the caudal fins of Taiwan tilapia -- a hybrid of Oreochromis mossambicus and Oreochromis niloticus niloticus -- can replace shark dorsal and pectoral fins in the highly sought-after shark fin soup, said Wang Yi-feng, general manager of the Kouhu Fisheries Cooperative in Yunlin County and a Taiwan tilapia expert.

Just over a year ago, Wang began studying how to turn tilapia tail fins into something very similar to processed shark fins. Tilapia fins are already on the market as a substitute and their increasing popularity could lower the demand that has been driving the overfishing of sharks, Taiwan Today reports.

“Caudal fins of Taiwan tilapia are a perfect stand-in for shark fins because they have the same appearance and texture,” said Wang. “Most importantly, the fact that Taiwan tilapia is a farmed fish guarantees stable supplies of the delicacy, which could prevent sharks from being wiped out.”

Just like shark fins, tilapia fins are made up primarily of cartilage, which is flavourless but has a desirable chewy consistency, Wang explained.

As opposed to shark fins, which can be extremely harmful due to the high levels of mercury accumulated by sharks, Taiwan tilapia fins pose no threat of heavy metal poisoning, he explained.

Founded in 1997, the Kouhu Fisheries Cooperative is made up of more than 200 fish farm operators from three southern Taiwan counties with a combined pond area of 2,300 ha, and represent a fourth of the country’s total tilapia farming area. Wang specified that the cooperative is Taiwan’s largest exporter of frozen tilapia fillets and also runs in compliance with European Union (EU) food standards while offering traceable product resumes.

Notably, shredded fins cost around USD 120 per kg -- one-quarter the cost of shredded shark fins. However, tilapia fins can only be used shredded because they are much smaller than shark fins, Wang pointed out.

The product is becoming increasingly trendy in Hong Kong, Japan and many five-star hotels in Taiwan.

Currently, the Tilapia fins’ monthly output stands at 1 ton, but this is expected to double or triple by next year to meet growing market demand now that the manufacturing process has matured, Wang said.


“I believe there is great market potential for tilapia fins and I’m confident that consumers will love them,” he added.

Wang is now researching the use of hyaluronic acid extracted from the crystalline lens of the Taiwan tilapia eyes to create cosmetic products.