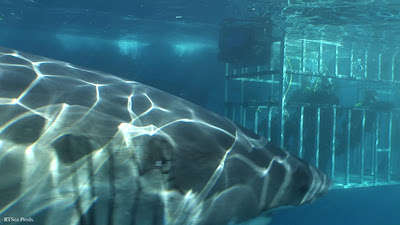 Gotta hand it to Richard Theiss over at RTSea's blog this morning for summing up the current commercial shark diving blow back in Hawaii in a nice little bow.

Well reasoned and to the point - when you see an Op-Ed like this one it's hard to do anything but re-post the whole thing, Kudos:

Once again, because of lack of foresight combined with glaring local media coverage, shark ecotourism has taken another hit, this time as a local issue in Hawaii with implications that could impact responsible operators statewide.

In Maunalua Bay on the island of Oahu, a boat owner faced a room full of 200 angry residents protesting his proposed shark diving operation. With one man against an angry mob and news cameras at the ready, it was destined to be a one-sided argument (see story and video). After reading more articles to gather additional details, it would appear that there are two issues at work here.

First, the critics are citing the two common arguments in opposition to shark ecotourism: that the activity disrupts the natural feeding behavior of the sharks, thereby jeopardizing the sharks; and that the activity makes the sharks associate humans with food, thereby making humans a preferred food source.

Secondly, this brouhaha once again points to the importance of shark ecotourism operators to consider the conservation and political components of shark ecotourism, not just the commercial aspects. Better planning and solicited expert support on the part of the boat operator could have avoided all of this.

Okay, first issue: chumming/feeding disrupts the sharks' normal feeding behavior. Well, it's not that simple. First, there are several methods for attracting the sharks: using fish oil as a scent attractant, using ground or cut up fish, and/or using hang bait (for larger sharks) or feeding by hand (for smaller reef sharks). Secondly, what is the frequency? Several boats a day to the same location, feeding the same sharks day after day? Or occasional trips, sometimes dictated by seasonal shark migration patterns. And lastly, what shark species are we talking about? Feeding a white shark with 2-3 pound tuna or bonito scraps or feeding whole fish to small whitetip reef sharks?

There are many recognized shark researchers who will support the contention that, unless done with high frequency and volume, sharks will not become detrimentally dependent on the food sources of shark ecotourism operations. While I have my own personal and scientifically unsubstantiated concerns about some of the stingray tourist attractions that see a steady stream of visitors, my anecdotal experiences in filming great white sharks at Isla Guadalupe, as an example, indicate that the small hangbaits the sharks occasionally succeed in catching do not disrupt their normal predation of seals, sea lions, large tuna or floating carrion like dead whales. And again, there are recognized scientists that will back up that contention. 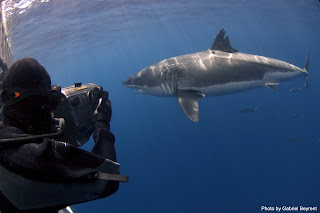 The other criticism leveled is that shark ecotourism makes the sharks associate humans as a food source. This accusation plays on the fears the uninformed public has about sharks and once again there are experts who will debunk the myth. As a filmmaker, I have been exposed to sharks much more so than the typical cage-bound diver and I have yet to see a shark behave in a manner that says because of chumming/bait in the water it has re-programmed itself to select humans as a primary food source. Could a shark mistakenly bite a human in the presence of bait or some other attractant? Of course; mistaken identity is the cause behind the vast majority of shark-human interactions worldwide, regardless of shark ecotourism activities. In addition to my open ocean activities with sharks, I have spent over 8 years in aquarium settings feeding fish in the presence of sharks or feeding sharks specifically and never did I see the sharks make the A=B connection (food=humans) that critics propose.

One of the news articles cited a comment from a critic at the meeting who compared the situation to the dangers of feeding bears at Yellowstone Park. Apples and oranges. Mammalian intelligence is different from shark intelligence. Bears have a broader taste palette and due to their foraging through trash can develop a taste for the foods we eat - so they will tear apart a tent or rip off a car door to get at a bag of Famous Amos cookies or Oscar Mayer hot dogs. While it is true that bears can attack humans and even develop a taste for human flesh, that has not proven to be the case with sharks: we are not on their menu.

This takes us to the second major issue and the one that is at the crux of this incident. The boat operator failed because he did not have the foresight to see that shark diving is evolving into shark ecotourism - and with that evolution comes greater responsibility on the part of the operators regarding supporting and promoting safe protocols, providing conservation education, and considering the political/PR interactions with various factions (pro & con) and the media.

It would appear that the boat operator did not have all his ducks in a row and found himself up against a hostile crowd, totally unprepared and without any sound arguments or strategies. First, for any successful ecotourism operation there is site selection (as with any business: location, location, location). I'm not familiar with Maunaloa Bay, but perhaps it is not the best location for viewing sharks. 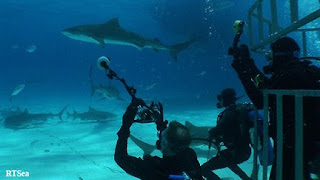 Human use density, shark biodispersion/density, dock facilities in relationship to other tourist activities (politics) - all have to be considered beforehand. And consideration must be given as to the species of sharks the operation intends to attract and the methods by which it will be done. Next, getting the support from recognized experts to counter the arguments mentioned earlier. Followed by developing relationships with local conservation, scientific, and community groups regarding educational opportunities and providing logistical support for scientific study. All has to be done before you put out your shingle and the first cage is lowered into the water.

All of this might seem to be a pain in the rear to someone who just wants to cash in on the growing shark craze but, sorry, that's where we are at today. The pure adrenaline adventure of seeing a shark is being supplanted by the opportunity to be enlightened to the beauty and importance of these animals which are vital to a healthy marine ecosystem. That's the difference between shark diving and shark ecotourism. And for the sharks, this extra burden of responsibility is a good thing.

An important sidebar to this entire incident has to do with an unfortunate loophole in the Magnuson-Stevens Fishery Conservation and Management Act which prescribes some very important marine conservation regulations but, as often is the case with other legislation, was subject to amendments which generate loopholes.

From 3 miles (beyond state regulated waters) to 200 miles offshore, the Act limits shark feeding to only harvesting or research. In other words, if you want to hook and either catch or release a shark, baiting/chumming is okay. But if you only want to observe and appreciate the shark, baiting/chumming is illegal. Shark ecotourism operators therefore must either operate illegally, or hook a shark (which runs counter to its conservation position), or insure that there is some valid research taking place on each boat trip.

How this loophole might be corrected is of major importance to all shark ecotourism operators in Hawaii and conceivably elsewhere. What the shark ecotourism operators need to do is to come together and agree on a set of responsible protocols regarding their operations, safety, conservation education, research support, and public relations so that they can present a unified position, backed by sound arguments and expert support, to local, state, and federal politicians and decision-makers. This may be asking a lot of local small businessmen, but it is what they are now faced with.

As a filmmaker, I have seen the advantages of responsible shark ecotourism in promoting shark conservation to the benefit, not the expense, of both sharks and people. I do not have a personal financial interest in any shark ecotourism operation but, as someone with a media and marketing background, I am willing to put my opinions forward as to the future direction of shark ecotourism.

The real tragedy in all of this is what is happening to sharks populations right now worldwide. Responsible shark ecotourism can be one component in combating the slaughter of tens of millions of sharks.
Posted by Horizon Charters Guadalupe Cage Diving at 4:49 PM 1 comment: 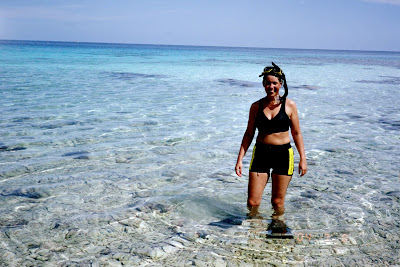 I'm suffering from allergy, so now when it is spring time I walk around like a zombie, always tired and with a runny nose. The last days I have started to hallucinate about a long sandy beach, some palm trees and lots and lots of sharks! Somewhere in this picture I can see myself as well... The question is: where do I go?! I have a few criteria: it must be affordable for a poor swedish marine biologist, not too advanced when it comes to diving since I'm only a open water diver and there should be A LOT of sharks! Any suggestions? Anyone that needs some sharky field work done?!

This picutre is taken in paradise! Five years ago I went there on a job. We made a shark film in Rangiroa, French Polynesia. It is sometimes shown on Animal planet. "Science of shark sex" it is called. Anyway, there are lots and lots of grey reef sharks in the famous Tiputa pass, and the mating of these animals was all that this film was about. The problem for me was that the sharks gathered at 50 m and deeper. I didn't get to see any of these at all! Instead I snorkled with blacktip and whitetip reef sharks and fed some lemon sharks - which was still better than nothing.
I've been thinking of liveaboards in the Red Sea, but my ears always tends to be a problem after a few dives... The Maldives could be nice I guess, but not cheap... Any ideas of where I should go?!
Posted by Hajcharlott at 10:30 AM 2 comments:

From time to time we check in on the Swim at Your Own Risk blog covering the world of shark attacks and the media surrounding them.

Cool image guys, thankfully you'll never have to throw 2lb chunks of bloody fish parts at this critter the next time to take the Staten Island Ferry.
Posted by Horizon Charters Guadalupe Cage Diving at 7:52 AM No comments: