When the shark conservation movement drills down to this level, we will have saved the species.

Until that day there is much work to be done. Please support your regional shark conservation programs. Together, we can "de-demonize" the shark.

Caution: This video contains live fining of a shark.

The Undersea Voyager Project has a new updated website.

What is the Undersea Voyager Project?

Smart discoveries, intelligent investigations, and undersea adventure as few have seen before. Project leader Scott Cassel is no stranger to the wild world of the deep and is changing the perception of some of the oceans strangest critters one dive at a time.

Welcome to the Undersea Voyager Project. 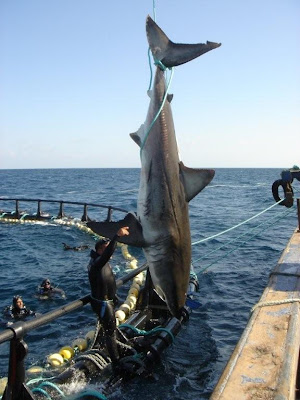 Like moths to candle light, white sharks are attracted to tuna pens worldwide in alarming numbers.

This week another in a series of images from 2009 featuring dead and dying white sharks being taken from commercial tuna pens in October.

While farmed tuna is being hailed as a viable alternative to wild caught tuna in many regions the accidental by catch of great whites that seek these pens out as an easy food source is an issue that needs to be addressed.

Most of the images we have seen are of breeding aged adults, which begs the question, are there no industry wide anti-shark protocols that are in place to save these animals?

We think there are. The lack of interest in this issue and the threat of boycott of farmed tuna products are twin barriers to real and lasting eco change.

More on shark conservation - One Shark.
Posted by Horizon Charters Guadalupe Cage Diving at 9:42 AM No comments: