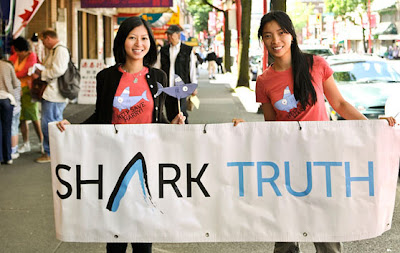 We spend a lot of time pointing out what's not working with shark conservation.

Namely to try and guide the discussion and or deflate those whose world views about themselves or conservation messaging is out of touch, out of whack, and downright counter productive to a global effort to save sharks.

So instead we wanted to focus on someone who is doing things right. A group that has created a global template for awareness and change within a community, and that group is Shark Truth.

We have been huge fans of Shark Truth from its inception back in 2009. Here's an organization whose branding, messaging, outreach, and media roll outs have been simply flawless.

If you want to see a website that's on point, on target, and frankly the future of shark fin conservation on a regional level you cannot help but admire what Vancouver, Ca resident Claudia Li and her team have put together.

Shark Truth could, if funded to its logical resource level, become the future of shark fin change across the planet. From Hong Kong to Malaysia and back smart and local boots on the ground efforts are the way to effect conservation change.

It's not sexy work, there's no reality tv moments, no $75.00 sustainable appetizers at Hollywood parties, what Claudia does is real conservation grind. Changing the minds and the hearts of her community one person at a time, making her and her entire team the Unsung Heroes of Shark Conservation.

If you would like to see a world where Shark Truth had branch offices across the planet, donate here this is money well spent, this is money that will actually save sharks for generations to come.

About Shark Diver. As a global leader in commercial shark diving and conservation initiatives Shark Diver has spent the past decade engaged for sharks around the world. Our blog highlights all aspects of both of these dynamic and shifting worlds. You can reach us directly at sharkcrew@gmail.com.
Posted by Horizon Charters Guadalupe Cage Diving at 8:51 AM No comments:

A Shark Movie that's got:

What's not to love here?

Posted by Horizon Charters Guadalupe Cage Diving at 7:30 AM No comments: