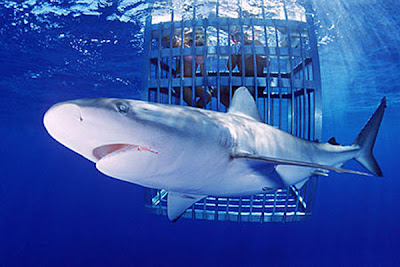 Shark tour operators who were cited for allegedly chumming off the North Shore say they will challenge the law.The case will likely cost more than the cost of paying a fine because it will raise some complex issues in court.

"It's basically a ridiculous charge and we are going to fight it all the way even to an appeal," attorney Ken Kuniyuki said.Five employees of two Haleiwa shark tour companies were charged with illegal chumming last week, nearly a year after federal investigators collected evidence.

The charge is a petty misdemeanor with up to a $1,000 fine, but an attorney for one of the men said state game wardens treated the defendants like felons.

The Story.
Posted by Horizon Charters Guadalupe Cage Diving at 7:23 AM No comments: