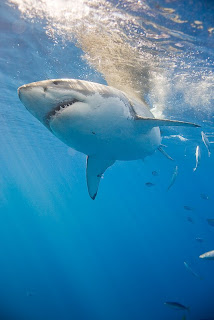 Occasionally we drop by the Shark Research Committee's website for a quick update on the state of great whites in California. Looks like it has been another busy month:

Newport Beach — On October 13, 2008 Tom Cupp was surfing near the Newport Beach River Jetties at Newport Beach. It was 5:30 PM with a clear sky and moderate Santa Ana winds. Cupp reported the following: “I was surfing and sitting very close to shore waiting for the next set and a seal swam in front of me, maybe 75 yards out from my location jumping in and out of the water like it was being chased. It was heading North about 100 yards then it tried to get out of the water, but a man was standing on the shore. The seal looked at the man for a minute or two then decided to swim South. I saw the seal’s head surface in front of me three times and again it was about 75 yards beyond me. Trailing the seal by about 50 yards I saw a triangular shaped fin that was 18 inches above water. It submerged after a couple of seconds but I got a good look at the fin and it was a shark. There was also a dead dolphin on shore but it did not appear to have any bite marks on it."

Ocean Beach — On October 13, 2008 Ryan Sincic was surfing at Ocean Beach, San Francisco. It was 11:00 AM and the sky was clear and the ocean calm. He had been on the water about one hour. One marine mammal was observed prior to the encounter. Sincic recounted the following; “While surfing outside the break, about 50-70 meters from shore, I saw a very large black fin with a white base come up above the water level. It moved horizontally along the water for 2-3 seconds and then disappeared. It came very high out of the water as well, higher then dolphins normally do. The fin was probably less then 15 meters from me, so I got a really good look at it including the details of the markings. My first reaction was ‘that was the biggest dolphin I have ever seen,’ my second thought was ‘wait that was way too big to be a dolphin.’ I continued to watch the fin to see if would surface again. It did not. I went online to see videos of dolphins and Great White Sharks to compare, and the size and markings on this fin resembled the inferior side of a pelvic fin of a very large Great White Shark. If I had to estimate the size of the fish I saw I would say definitely more than 10 feet. I swam in toward shore near a group of surfers, one of which also saw the fin as well and said it was very dark and very large.”

Please report any shark sighting, encounter, or attack to the Shark Research Committee.

By now the world knows the plight of "Sammy the Whale Shark" in Dubai. As the story unfolds
this "rescued animal's" back-story has changed from one of wild animal care to wanton wild animal acquisition.

Which opens the door to an interesting story we can now tell you.

Several months ago we got a phone call from Dubai and an unnamed source who was looking to acquire "several great white sharks" for display. The source was wondering if our company Shark Divers was in the business of sourcing white sharks for public mega aquariums.

Naturally we were interested in the mechanics of the deal. How soon might they want these animals? One year. How many animals? Up to 5. How much per animal acquisition? The numbers varied but all told we were looking at $20-30 million for the entire project.

Which opens up the questions, the ethics, and the debate about wild animal acquisitions and large aquarium's desire to have and display charismatic megafauna...at almost any cost. While we're not implying the call came form this particular aquarium, the trend in Dubai at least at this time is animals at any cost.
Posted by Horizon Charters Guadalupe Cage Diving at 11:01 AM No comments: