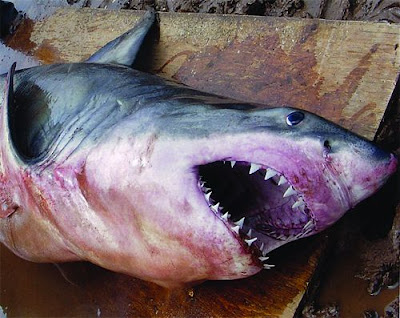 The three-metre, 272-kilogram shark was caught in a fishing weir by fisherman Wayne Linkletter, near Economy, N.S.

Steve Campana, head of the Canadian Shark Research Laboratory, said the shark was likely looking for fish when it got trapped.

“They’re interested in fish and perhaps small seals and dolphins. It’s very unusual for a great white to attack a person and usually when they do, it’s because they look up and see a surfer on a surfboard and it resembles a seal, which is one of their favourite prey,” said Campana.

Campana added that great white sharks are often more threatened by humans, rather than the other way around.

“Canada is within the range of great white habitat, so they’ve undoubtedly been coming up here since time immemorial,” he said. “It’s just that the population of great whites used to be much larger, at least 10 times larger, just 30 years ago than it is now.”

Campana said the sharks are sometimes seen around Sable Island.

“The great whites will go up there and have a buffet meal of tasty young seal,” he said.

The shark was caught alive but later died.

The head was sent to Halifax’s Museum of Natural History for further study.

Bahamas Tiger sharks are calling and fall is just around the corner. There's no better way to celebrate the end of summer shark diving than being in the Bahamas surrounded by pristine offshore reefs, ancient wreck sites, sharks and wild dolphins.That's what we do here at Shark Diver each and every year with six new, and returning dive friends.

Mark your calendar and join us September-November in 2011 and again in 2012 for unique shark encounters close to home when the biggest sharks appear in the Bahamas.

This spring 2011 was a banner season for us entertaining multiple film crews, a site visit from the great folks over at the Bahamas Film Commission, and divers joining us from as far away as Italy!

Here's a look at Tiger Beach and the diving from RTSea Productions: 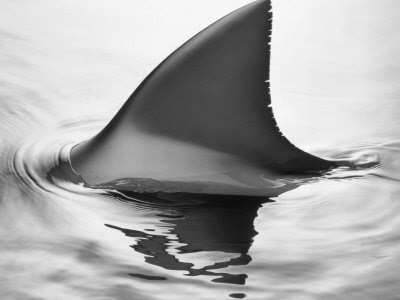 An international team of researchers, conservationists, commercial dive operators, and government agencies has joined together to deploy and operate an array of acoustic devices to monitor the movement of sharks in the waters of Palau. This array, the first of its kind in the waters of Micronesia, supports Palau’s world-leading effort to conserve and protect sharks within the whole of their Exclusive Economic Zone.

Initially established by the Micronesian Shark Foundation, the Save Our Seas Foundation, and the Australian Institute of Marine Science, the 14-station array has recently undergone an expansion with funding from the United States National Oceanic and Atmospheric Administration (NOAA), through the Pacific Islands Ocean Observing System (PacIOOS). PacIOOS is a program led by the University of Hawai‘i at Mānoa’s School of Ocean and Earth Science and Technology.

The PacIOOS investment is targeted at increasing the density and geographic range of stations—providing a more precise and complete picture of shark movement in the Palauan archipelago.
“Sharks are a sentinel species in the global ocean and are important for ensuring the health of all ocean species in the future,” said PacIOOS Director Chris E. Ostrander. “Shark populations worldwide are threatened by increasing illegal fin fishing and a shifting climate. The Government of Palau’s dedication to conserving shark populations in their waters is an extraordinary step to helping shark populations recover and we are pleased to be able to assist, with our partners, in providing necessary information on shark movement, migration, and mating.”

PacIOOS is the Pacific Islands regional component of the United States Integrated Ocean Observing System (IOOS) and is charged with providing timely, reliable, and accurate information on the coastal and open ocean waters of the Pacific Islands to residents and visitors alike.

For more information about this topic, please contact Chris Ostrander at (808) 956-5902 or chriso@hawaii.edu.
Posted by Horizon Charters Guadalupe Cage Diving at 8:32 AM No comments: