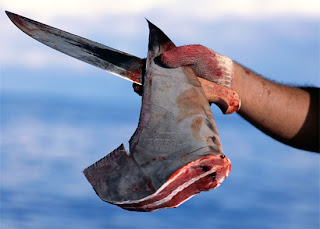 A bill intended to crack down on the harvest of sharks for their fins was approved by voice vote Wednesday by the House Natural Resources Committee. Lawmakers from ocean states praised the bill as a way to ensure responsible fishing practices.

“There’s a hell of a lot of two-legged sharks around that are a lot more dangerous than the ones with fins in the ocean,” said Neil Abercrombie, D-Hawaii.

Committee Chairman Nick J. Rahall II , D-W.Va., could not resist joking that sharks were not too different from members of Congress. “The chair will note this is not a member self-preservation act,” he said.

The measure would strengthen enforcement of an existing federal prohibition on removing the fins of a shark and discarding the carcass, which was first established in the Shark Finning Prohibition Act of 2000.
Posted by Horizon Charters Guadalupe Cage Diving at 7:04 PM No comments:

Heard at the water cooler this morning (Actually in St.Thomas this week) the following dive industry rumor:

Aggressor Diving is in acquisition of Peter Hughes Diving.

It's been an open secret for the past two years that Peter Hughes has been interested in a buyer.

Exactly when the announcement of this new merger will take place is rumored to be sometime in the next three weeks.

We'll keep you updated. With the cost of fuel rising to astronomical levels expect more mergers and buyouts within the dive industry in the next year or two.
Posted by Horizon Charters Guadalupe Cage Diving at 3:08 PM 2 comments: 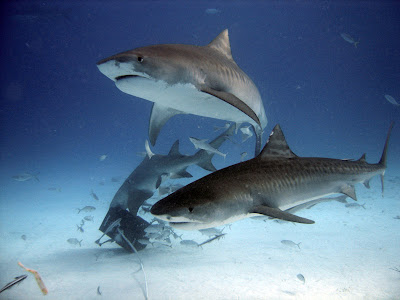 The Shear Water affair earlier this spring left an entire dive industry fractured, and the Bahamian Government pondering the whole notion of commercial shark diving in it's waters.

For the most part the media did it's best to highlight the worst aspects of our industry.

Now, for the first time, an in depth look into an industry that needs to spend less time with local "petitions" and more time looking at commercial shark diving as a global industry.

Markus Groh felt uneasy aboard the M/V Shear Water. A buddy had talked him into booking a six-night trip on the charter boat with nine other Austrians to scuba-dive with sharks in the Bahamas. There would be dead fish in the water to attract the big boys — tiger sharks, lemon sharks, hammerheads, and bull sharks — and there would be no cages to protect the divers. Only wetsuits. It would be the experience of a lifetime.

The entire article here. We have heard that images from this event have now been made public and will be posted to the media shortly.
Posted by Horizon Charters Guadalupe Cage Diving at 1:54 PM 1 comment: