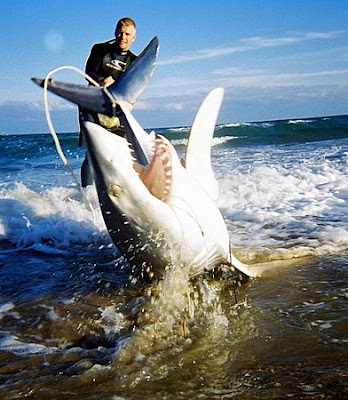 More of the "Zowie Kapowie" with this latest video sent in from shark blog fan Stephen from New York.

We're not sure about this latest video. What do you get when you have 40km of deserted beach, 4 bored fishermen, 12 cases of beer, and some Great whites?

Bigfoot Found? Nothing Sharky About It 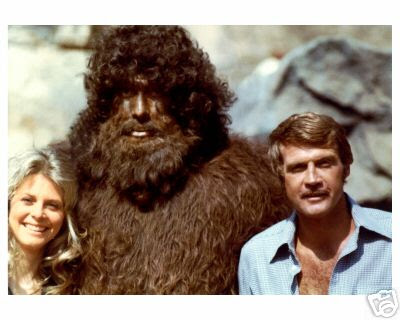 The blog sphere just lit up with the unexpected news that Bigfoot has been found...and no this is not a joke.

According to SearchingForBigfoot.com-and about 320 alternate sources-Tom Biscardi, Bigfoot hunter and part time huckster will unveil DNA, video and images, but not the actual specimen he "collected" in Georgia on Friday.

The supposed discoverers, Matthew Whitton and Rick Dyer, are believed to have shot the 500lb critter in the woods of northern Georgia. Whitton is a Clayton County police officer who has been on medical leave after being shot himself in July and Dyer is a former correctional officer, the Atlanta Journal-Constitution reported.

As of this morning, Pacific time, Biscardi's website had crashed (there's a lot of cryptophiles out there) with few further details. We loves our monsters.

We'll keep you updated-actually we won't-but you can check in for regular updates at these sites. After all, we're all about sharks, not Bigfoot:

More Sharks "Than You Can Shake a Stick At" 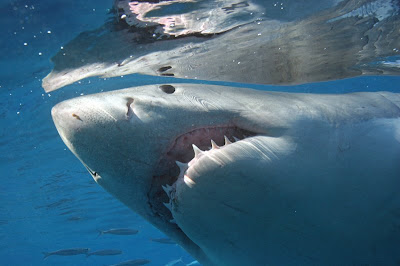 Santa Barbara, California is known for many things-casual shark encounters are one of them. This week the Santa Barbara Independent has local shark coverage unlike any news source we have seen in a while. Rarely do news sources take on the subject of sharks and rarely do they get any depth on the subject.

It's called shark immersion, and for anyone who loves sharks the Santa Barbara Independent's coverage is simply fascinating reading.

Here's this weeks sharky line up:

• Sharks and Humans Getting to Know Each Other in the S.B. Channel — by Ethan Stewart

• Sharks and the Chumash — by Matt Kettmann

• Are Sharks Really the Eating Machines We’ve Made Them Out to Be? — by Ethan Stewart

• Sharks of the Channel — by Indy Staff

Posted by Horizon Charters Guadalupe Cage Diving at 8:03 AM 1 comment: