Currently being passed around the blue blogs some interesting research video from Australia:

Baited Remote Underwater Video Stations (BRUVS) have been developed by AIMS scientists in order to monitor the vast areas of deeper inter-reef and shelf habitats inaccessible to research divers so that important bioregions there can be included in marine protected areas.

BRUVS consist of tourist-grade “HandiCam” video cameras in simple underwater housings made of PVC sewer pipe and acrylic, with a canister of minced pilchards on the end of a bait arm in the field of view. The housings are held in steel frames, and are deployed in strings of four to six under separate ropes and floats, to be picked up after one or two hours filming at the seabed.

The range of fish, sharks, rays, sea snakes and other animals sighted on BRUVS tapes has been remarkable – over 300 species to date, from 3cm leatherjackets to 3m hammerhead sharks.

Posted by Horizon Charters Guadalupe Cage Diving at 8:52 AM 1 comment: 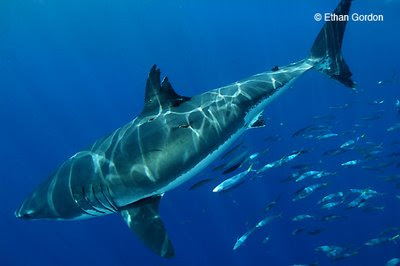 Guadalupe Island, with a total land area of 80,000 acres, is one of the most remote islands of Mexico. The island’s only community is mostly fishermen and their families who have been using the island for decades, fishing lobster and diving abalone. Guadalupe Island has one of the best preserved marine environments of Mexico. Since the decree in 2007 of the “Guadalupe Island Biosphere Reserve”, the management and regulated protection of its natural resources is under the federal authority of the Natural Protected Areas Commission.

Guadalupe Island is one of the best examples in the world of an ongoing island ecosystem recovery where different entities (governmental and nonprofit) are participating. A water desalination plant is the local community's most urgent need. A desalinization system will be purchased with the help of Seacology in exchange for the creation and protection of a 1,235-acre marine reserve for a period of 10 years, where fishing, extraction of resources, damage to the sea floor, contamination or any other kind of damage is forbidden.

The desalination system will be able to supply as much as 3,000 gallons per day. The water supply could also support reforestation and restoration projects, particularly in the remaining patches of endemic forest. In 2000 and 2002, Seacology funded projects to construct and maintain fences to keep invasive goats out of the most sensitive areas containing endemic plant species. Goats have since been eradicated from the island.
Posted by Horizon Charters Guadalupe Cage Diving at 8:40 AM No comments:

Over at the Dorsal Fin Blog a very nice video expose on the perils of fishing at white shark hot spot Isla Guadalupe.

Catching a 100lb tuna at this site is exciting, having said tuna "whomped on" by a 15 foot great white? Priceless.

Posted by Horizon Charters Guadalupe Cage Diving at 8:27 AM No comments: