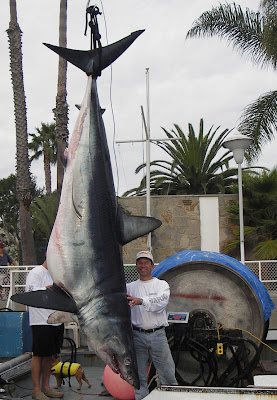 Sometimes government can act on the behalf of sharks without even knowing. Just such a limited window of opportunity is happening now in NJ where unsigned bills allowing new fishing regulations for sharks might prohibit the entire 2010 sport caught shark fishing season.

A successful and savvy conservation lead campaign would have a remarkable effect at this time:

New Jersey fishermen could see a shutdown of the summer shark fishery - and the suspension of big money shark fishing tournaments because a two year old revision of the state's marine fishing regulations was not approved before former governor Jon Corzine left office, industry advocates say.

Now they are afraid the regulations could be delayed again by Gov. Christie's declaration of a 90-day moratorium on new regulations and rulemaking.

"Because of Governor Corzine's failure to act on the package, New Jersey is facing a potentially damaging shutdown of our shark fishery," the Recreational Fishing Alliance says in a letter sent today to the governor's office.

The Atlantic States Marine Fisheries Commission is scheduled to meet in Alexandria, Virginia, from February 1-4, and during those meetings New Jersey is expected to be voted out of compliance on our shark regulations, which will begin the process of shutting down our shark fishery.