Monday - Back to the Roman Galley, Row!

A very good friend sent in an image of "his cubicle" this week and I was struck by the sameness of the cubicles that preceded his.

An endless parade of corporate cubicles...what a depressing sight on a Monday.

If there's an outlet for corporate misery it has to be You Tube. So, to all you cubicle workers both great and small, know that your plight was once much worse than it is now and here to highlight that is your Ben Hur moment from 1925.

"Deep-locked in the heart of each ship, a hell of human woe" 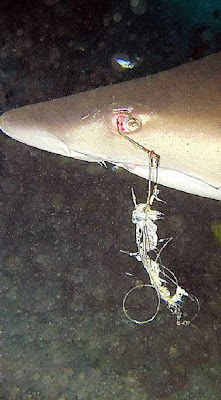 Great story from Australia today as one image sets the table for stronger regional shark protections:

A PHOTO of a grey nurse shark with a gang hook protruding from its eye has helped convince the State Government that more needs to done to protect the endangered species on the Mid North Coast.

The government has assured environmental groups it will consider tightening fishing restrictions off South West Rocks where the critically endangered sharks exist.

At the same time, greater protection for grey nurse shark colonies may follow off Coffs Harbour as the government reviews its Solitary Island Marine Park policy.

Fish Rock and nearby Green Island near South West Rocks were declared as critical habitat for the sharks in November 2002, resulting in fishing and diving regulations.

We will be posting Wolfgangs industry observations about Tiger feeding today. In a case of Monday Sharky Zeitgeist Why Sharks Matter covered the same issue from a different angle.

Commercial shark diving and research. It is hard data that helps our industry counter the hysterical anti-shark diving sentiment that often finds its way into the media mainstream:

Posted by Horizon Charters Guadalupe Cage Diving at 8:41 AM No comments: