From the RTSea Blog this week:

From time to time, I have the pleasure of speaking about shark and ocean conservation issues at various venues, particularly aquariums. Sometimes it is a formal affair - a screening of my white shark documentary, Island of the Great White Shark - and sometimes it is a more casual event, often including groups of younger children - the all-important next generation of ocean conservationists. 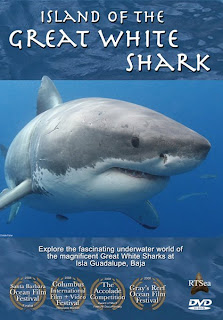 At the end of the month I will get to do both at the Tennessee Aquarium in Chattanooga, TN. I will arrive at the end of the month to do local media interviews and then on Friday, July 31st, I will be speaking with a group of Aquarium "day-campers" ages 7-10 and will conduct a private screening/Q&A with staff, volunteers, and patrons that evening.

On Saturday, August 1st, I will be conducting two public screenings and Q&A's with the Aquarium's visitors as part of their regular admission.

The Tennessee Aquarium is a marvelous venue in that it is essentially two separate aquariums - one building devoted to a worldwide examination of freshwater (and not just guppies and trout; how about 10-foot long beluga sturgeons!) and another for saltwater. I visited the Aquarium for the first time in June and was very impressed with its scope and the dedication of its staff in getting people to appreciate aquatic life not only in their backyard but globally.

So, if you are in the area, come visit the Tennessee Aquarium on Saturday, August 1st. As many aquariums do this time of year, the Tennessee Aquarium piggybacks on the popularity of Discovery Channel's Shark Week and I am happy to be part of their campaign to educate the public to the reality of sharks, their importance, and the threats and challenges they face.

Maybe I'll see you there!

To learn more about the Tennessee Aquarium, visit their web site. Click here.
Posted by Horizon Charters Guadalupe Cage Diving at 11:29 AM No comments:

Back in May we posted an update on the Carl Meyer study that looked into Hawaii shark tourism and habituation of sharks to chum.

This landmark study has come at a time when a virulent anti-shark diving effort has been pushing to have commercial shark diving banned in Hawaii's waters.

The relentless anti-shark diving campaign has culminated on the island of Maui, which has no commercial shark diving in its waters, proposing a bill to ban it.

There's still time to save two very good shark diving operations in Hawaii. Follow the media trail and make a few of your own. The major news media has grabbed on to the Meyer study (which makes for great reading) and have positively reported the conclusion.

The news of this study should be posted to every chat room, scubaboard, and social network site for divers as soon as possible. The anti-shark diving lobby plays one card and one card only - fear.

Without the fear of sharks commercial shark diving wins on the argument of sharks=tourism=economy.

Help Hawaii make the right decisions about the future of off shore (3 mile) shark diving.