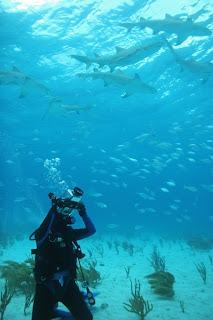 This morning we read an astonishing post by a shark diving operation in Fiji. As we have come to learn "the hard way" the commercial shark diving world has a similar unsaid credo to that once uttered by Ronald Reagan-"Speak no ill of fellow shark diving operations". Or put less succinctly by those still in the 80's mindset to our industry,"Mind your own goddamn business".

Commercial shark diving has evolved from a few maverick shark divers, who showed the way back in the late 70's, to an actual $200 million dollar global industry. It's a hard fact few within our industry fully comprehend the magnitude of.

Unfortunately, our industry is also at point in time where our actions are inspiring an entire generation of up and coming operators and underwater photographers. In many cases they are being inspired to attempt animal encounters that will inevitably lead to spectacular and unfortunate events.

It has happened already and the perception of sharks when this happens dumps them back into stone age erasing years of positive shark messaging and pro shark efforts. It's a classic Catch 22. The desire by some for closer encounters with top predators to educate the public these animals are not killers, which inevitably leads to an accident or outright attack on a diver, which then destroys the animals reputation once again.

The two burning issues that most commercial shark diving operations fail to realize are the following:

1. Due to the nature of what we do we are high value targets for the media and for misguided wildlife advocates.

2. Regardless of where you have a shark operation your actions ripple through a global industry. This is a fact.

I have to hand it to Beqa Adventure Divers for taking the stance they have taken. We have been strong advocates for industry standard protocols with macro sharks like Tigers, Bulls and Great Whites. On the flip side the imagery taken by Amanda Cotton was stunning and one might argue several of her images will do great things to change peoples perception of sharks.

As we have said in the past there's a "line in the sand" between what we do as commercial shark diving operators with the general public and needs of commercial underwater photography. We covered this same issue last month.

What we do with sharks should be based first and foremost on long term sustainability not a "run of good luck".
Posted by Horizon Charters Guadalupe Cage Diving at 12:45 PM 4 comments: