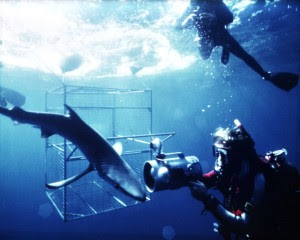 From Budd Rikers blog Follow Your Camera this week. Stories of those who first left the confines of the cage to discover the wild and wonderful world of sharks.

It is to these first pioneers that a global 400 million dollar industry was born.

I received a post in my Facebook account about an article in the online version of the Pasadena Star News regarding shark diving. My comments in the article were taken from a discussion I had with the author, Margo, about what attracts divers to sharks. Reading this got me reminiscing about my earliest shark diving and how I got started leading groups of divers to see sharks in the wild.

In the early 80’s I was the owner of a dive store that, coincidentally, was in Pasadena California. Always looking for new adventures for my dive friends (my customers were always my diving buddies too), I began taking divers to the Coronado Islands in Mexico aboard Dick Howard’s Hustler dive boat to feed….morey eels. We brought along anchovies and showed divers how to feed the eels, bring them out of their lairs, without losing fingers. I had learned this technique from the divemasters in Bonaire, actually. We ran many successful trips and many divers got a close-up, new found respect for these maligned animals. It really was fun!

After a year or two of this activity, I was lamenting with Dick on his boat, “What do I do to follow up morey eel feeding and keep my divers excited and learning?” “What about shark diving?” Dick blurted. Now, remember, this was early 1982 and shark diving was virtually unheard of. “You’re out of your mind!”, says I. But, after talking more about it I started to think it was not a bad idea. So, I contacted Jack McKenney, a filmmaker friend and borrowed his cage, put some dates together, picked a small group of close dive friends, and 4 weeks later we were on our first trip. We chummed for about 3 hours while the Hustler drifted along with a sea anchor and, voila, we had plenty of blue sharks all around us. We even had a visit from a couple of Makos.

That was the beginning of an adventure that would last a few years as I brought customers out to see sharks, first hand, in the wild in cages (the divers were in the cages). What grew out of this experience was a profound new attitude and respect for sharks, and marine life in general, from all who were fortunate enough to join in. I even ran into a fisherman/diver in another dive shop who was boasting about catching blue sharks on hook and line. “Hey”, I said to him. “You wanna really be macho and dive with the blues? Why not join us on one of our trips?” He did, and he never fished for sharks again! I am quite proud of that!

I chronicled my experience with the blue sharks in an article I titled, Into the Blues and submitted it to Steve Werner at Outdoor Photographer Magazine, a new photo magazine that remains my favorite to this day. Steve’s rejection letter contained words of reckless, crazy and liability…. Steve, you actually made me feel on top of the world….

A lot of time has passed and shark diving is still an amazing adventure. SharkDiver.com and many other organizations are bringing the plight of sharks everywhere directly to those who can help them the most, you and me! No longer viewed as eating, destructive machines, sharks are seen for what they really are. Majestic, awesome, even spiritual creatures that have earned a place on this planet. I hope all of the divers who joined me in those early days, and all the divers who have enjoyed encounters with sharks, are doing all they can to save these animals from disappearing forever.

For more information, visit shark blogs like SharkDiver.com and RTSeaBlog