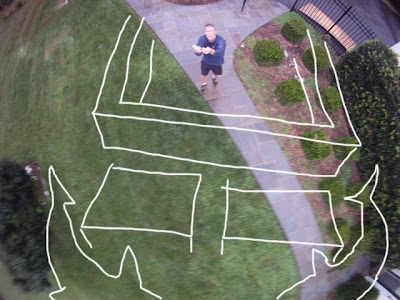 Why do we love our Shark Divers?

This is why. Got an email from a diver who'll be out at the island with us in a few weeks with a "plan" to shoot white sharks in a way never tried before.

Yes this is the mock up, and yes, Michael has spent the last month planning, refining, and playing with this set up in his back yard.

Now all we gotta do is deliver two white sharks in perfect harmony, both equidistant from the port and starboard cages and from the looks of things Michael wants each animal to be about 20 feet long.

No problems we can do that, let's go shark diving!

The Trip of a Lifetime - The White Sharks of Isla Guadalupe

When Sarah Fuller called us way back in 2010 to go white shark diving at Guadalupe we were more than happy to oblige.

Over the past decade in the shark business we have noticed the rise of solo female Shark Divers. Women like Sarah who will travel 210 miles into the middle of the Pacific not knowing a single soul to dive with Great White sharks.

Women like Sarah are not your mothers adventure seekers, they are the new generation of traveling cool:

In the summer of 1975, my parents took me to the drive-in movie theater to see Jaws.  I was three and a half years old.  And we were spending the summer at Cape Cod.  Fortunately, what could have been a major childhood trauma, instead launched a summer of fun at the beach as we all played Jaws, swimming in the ocean and grabbing each other by the ankles.

This Labor Day weekend, after more than a year of planning, with the help of Shark Diver, I got to meet the magnificent sharks I'd been fascinated with for most of my life.

The trip started out a bit rocky for me. Thinking, "I like boats and I won't get seasick," I waited until I was on the boat to put on the seasickness patch and take my Bonine.  Big mistake.  I basically threw up all the way to the island.  Mark in the galley took good care of me, offering crackers and even finding me a can of ginger ale.  And after about 24 hours, I finally managed to keep down a peanut butter and jelly sandwich.

But as soon as we got to Isla Guadalupe, I felt great.  The cages went in the water as soon as we arrived and I went in on the second rotation.  Dive Master Martin took time to help each of us get used to breathing through the regulator and to make sure we felt comfortable in the water.  From the first dive, safety was the focus and we knew that people were watching from above and making sure we were OK.  I didn't see any sharks on my first dive, or nothing I can be sure was a shark, there were some shadows moving well below us.  But on the second dive, Pablo Escobar and his distinctive white nose arrived at the cages.  We saw five sharks on our first day and nine on the second.  Shredder was a group favorite, spending lots of time with us throughout the trip.  We also got to spend some quality time with Bite Face.  An unknown shark tried to get a little frisky and take a nibble on the cage, but he was gently guided away with a big stick.

While the sharks were the headliners of the trip, it would not have been the fantastic experience it was without the truly amazing crew.  They were very attentive (almost too much sometimes, I can get up and get my own water you know, I don't need to be waited on hand and foot). Captain Cary worked so hard the whole trip to make sure the boat was running safely. Little Kyle had boundless energy and was completely fearless, especially when he got on top of the cages to try and get some photos of a new shark (something I am certain none of the passengers would have been allowed to try).  Nick had a great self deprecating sense of humor and constantly positive attitude and he looks pretty fantastic without a shirt (he doesn't wear one often).  Captain Kyle was part Julie McCoy and part Merrill Stubing, all for fun, within reason.  Most importantly, every member of the crew seemed to be there because they love the sharks and love what they do.  They made sure we had almost as much fun out of the cages as in them.   A really interesting group of people with great stories to tell.  And they play a mean game of charades.

The island, for being a rocky, inhospitable place, also turned out to have amazing beauty to offer.  The sunset's are nice, but it's the sunrise that has the real wow factor.  You just have to get up at 5:30AM to see it.  And the night skies are just as impressive.  If you can stay up until about 1:00AM and watch the moon set behind the mountain, you're rewarded with more stars than you ever thought possible.

I'm looking forward to going back to Isla Guadalupe with Shark Diver in 2012 to see my shark friends Pablo Escobar and Shredder and Bite Face, and to make some new ones, both below and above the water.