"After some trial and error I figured out what the button with the red duct tape over it does. Note to self: Do not press that button while in port." 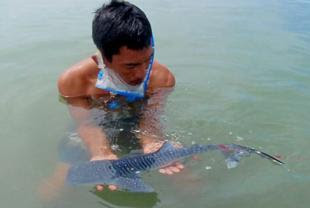 This weeks news coming from WWF staff in Donsol, Philippines is shedding new light on the breeding habits of the biggest sharks in the ocean - and how serious boots on the ground efforts by NGO's help shark conservation.

A tiny whale shark was found at the weekend with a rope tied around its tail, secured to a stick poked in the sand in a coastal town near Donsol in Sorsogon province.

Environment group WWF said a hawker was allegedly trying to sell the fish in an area that sees the world's largest known annual gathering of whale sharks. After checking to see the baby whale shark was unhurt, WWF, police and government officials measured and photographed it before releasing it in deeper water.

The find is very significant for scientists, who know little about where the biggest fish in the ocean goes to give birth to its live young.

Until now it was thought the Philippines was simply a stop-off point for the rare species. But WWF-Philippines chief executive Jose Ma Lorenzo Tan says the tiny size of the whale shark caught on Friday strongly suggests it was born there.

"In spite of all the research that is being done worldwide on whale shark, to this date no one knows where they breed or give birth," Tan says.

"For many years, scientists thought that Donsol was merely a 'gas station' along the global network of marine highways where whale sharks cruised.

"This new discovery is the first ever indication that this coastline may actually be a birthing site." Tan said the find showed how critical it was to protect marine environments in the Philippines, and other countries that make up the Coral Triangle.

"This is no surprise. After all this has happened in the Coral Triangle - the nursery of the seas - where life begins, and many things remain possible," he said. WWF promotes conservation programs across Coral Triangle countries, which also include Indonesia, Malaysia, Papua New Guinea, the Solomon Islands and East Timor.

It is aiming to establish a network of marine protected areas that will help ensure whale sharks continue to migrate safely to the waters off Ningaloo Reef off Western Australia's northwest coast.

Papua New Guinea is hosting a high-level meeting this week on a plan to protect marine ecosystems and food security in the Coral Triangle. Details will be announced at the Coral Triangle Initiative Summit at the World Ocean Conference on May 15.
Posted by Horizon Charters Guadalupe Cage Diving at 8:49 AM No comments: