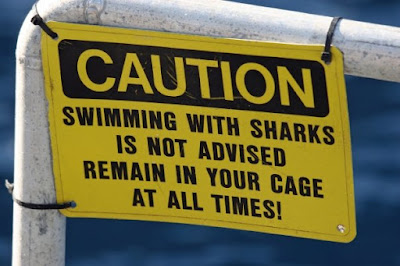 Our entire industry will have to do a lot better in response to the perception that we condition sharks, exploiting them for personal gain.

More on the controversy of chumming.

I am neither a marine biologist nor a psychologist. I am not even an animal rights activist. I am a scuba diver and an outdoor enthusiast, and these two endeavors have brought me in close proximity with a myriad wild animals, in their natural habit.

Over the thirty-eight years I have been diving, I have seen many sharks, but I have never been tempted to offer these magnificent creatures anything to bite. Just to clarify my position, I do not fear any animal in the sea, but I do respect them and their habitat. My very first dive instructor advised not to drag around dead fish while diving and that blood would attract sharks and other unwanted visitors. These practices, which I have avoided during my diving career, are now used by dive operators to intentionally attract and feed sharks.

The practice of shark feeding is nothing but an exploitation of a shark’s natural behavior for the dive operator’s personal gain. Though observing a shark feeding is an exhilarating experience, I believe the participants take part unaware of lasting and potentially dangerous effect this activity has on the natural feeding habits of these predators.

In the 1901 Ivan Pavlov developed the concept of "conditioned reflex", meaning a response controlled by a stimulus, by studying the gastric function of dogs. Pavlov externalized a dog’s salivary gland in order to s analyze what response it had to food under different conditions. It is popularly believed that Pavlov always signaled the occurrence of food by ringing a bell. However, his writings indicate that he used of a wide variety of stimuli, including electric shocks, whistles, metronomes, tuning forks, and a range of visual stimuli, in addition to a ringing bell.

The United States Forestry Service has observed a similar Pavlovian response in the activities of bears in national forests. The signs cautioning "DO NOT FEED THE BEARS" are not there because peanut butter and jelly sandwiches and fried chicken are bad for the bears (though they may not be their natural diet), but because the bears’ keen sense of smell and desire for an easy meal have resulted in injured tourists and some vehicles becoming "pop top" food containers.

Shark feeding is just another example of animal behavior being altered by humans. These animals will, if they have not already, associate boats and divers in the water with food. Research continues to be done on sharks’ feeding patterns, and we do not yet know how far each species of shark range in their search for food. However, I cannot help but be concerned that the boat and the divers I am with may be mistaken for a shark feeding when diving in waters where shark feeding is permitted. I fear that a shark feeding will go badly and an observer will be injured or killed, or a diver will be attacked by a hungry shark that has lost some of it natural ability to hunt its normal prey. The inevitable human response to this would be something like what was seen in the movie Jaws - an outcry of "Kill the Sharks!"

The consequences of shark feeding would have an adverse effect on the institutions that implemented it. It will become even harder to see these magnificent creatures in their natural habitat. If a dive operator can take divers to an area where sharks are known to gather, and can show divers sharks without interacting with them, then so be it. However, in my experience, most shark encounters have been pure happenstance; I just happened to be at the right place at the right time.

History has repeatedly demonstrated that when humans intercede in animal behaviors, there are consistently devastating consequences for the animal. It seems that the only animal that has not learned from this behavior is the human.

Good reading for anyone who's in the shark conservation business.

If international commercial fisheries have no solid idea what regional shark stocks look like, how do we begin the process of evaluating effective conservation initiatives and sustainable fisheries?

The Western and Central Pacific Fisheries Commission (WCPFC) has taken a major step toward addressing concerns about shark populations with initial approval of a three-year Shark Research Plan by its Scientific Committee.

The plan will be led by the Oceanic Fisheries Programme of the Secretariat of the Pacific Community, and will contain assessment, research coordination and fishery statistics improvement components. The overall aim of the plan is to evaluate the status of blue, mako, oceanic whitetip, silky and thresher sharks in the western and central Pacific Ocean (WCPO) and to establish better datasets to support future assessments. Following its recent endorsement by the Scientific Committee, the Shark Research Plan will be presented for full Commission approval at its annual meeting in Hawaii in December.


This article outlines the background and context of shark issues in the WCPO, introduces the key species and previews the forthcoming assessment work.

Sharks are among the species to be managed by regional tuna fisheries management organisations (RFMOs) but little has been done worldwide by these organisations to manage shark catches. In fact, because so few national fisheries catch reporting systems record sharks, RFMOs often lack sufficient data upon which to draw conclusions about the status of shark stocks. At the same time, there are increasing concerns about fisheries targeting sharks and about continued growth in the shark fin trade. In the WCPO, two species of sharks are categorised by the International Union for Conservation of Nature (IUCN) Red List as globally endangered and another sixteen as globally vulnerable and it is not difficult to predict that catch limits may, in future, be required to safeguard some stocks. The current challenge facing the WCPFC is to find the proper balance between shark conservation and utilisation, given the considerable uncertainty regarding the current status of stocks.