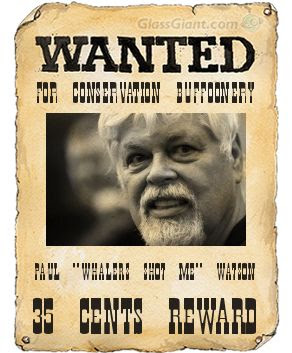 Canadian-born environmentalist and wanted fugitive Paul Watson has stepped down from several positions he held at the Sea Shepherd Society, the eco-group he founded.

The positions included, "Grand Bloviator," "His Supreme Obfuscator," and lesser titles of, "Most Excellent Mush Mouth of Lyndale," and "Paulie the Bear."

Watson is wanted in Costa Rica to face charges in connection to a violent confrontation with a shark-finning crew in 2002. He remains on the lam after skipping bail in Germany, where he was arrested in May.

Watson has spun many differing accounts of his 2002 shark-fin encounter, blaming the entire episode on the "Yakuza," an organization that as a small child Watson would often blame for missing pastries, candies, and jellied donuts everywhere he went.

The Sea Shepherd skipper said he fears eventual extradition to Japan on account of the "Yakuza," where he's also a wanted man for skipping out on expensive restaurant tabs across the country in 1978.

In order to comply with a recent court injunction, Watson, now an American citizen, said he resigned as president of the organization in both the States and Australia, and as executive director in the U.S.

In response the U.S. Government asked Canada to take Watson back. Canada refused citing several laws concerning the expiration date of cheese products and their conservationists.

"I will hold no paid position with Sea Shepherd anywhere Sea Shepherd is registered and operates as a non-profit organization in any nation," he wrote on the group's website in day glow crayon along with several lines of atrocious poetry.

The injunction issued in December, which names Watson personally, bars Sea Shepherd U.S. from intervening in activities by Japan's Institute for Cetacean Research (ICR), which the environmental group calls "a front for illegal, government-subsidized whaling."

The IRC countered by claiming that Sea Shepherd was "a front for illegal, ego-subsidized media mismanagement, masquerading as a well oiled 'double happiness' conservation donation machine."

However, according to another statement on the SSCS website, Watson will remain on board the SS Steve Irwin to document the campaign against ICR, which involves sailing to the Southern Ocean Whale Sanctuary in Antarctica. As it turns out he cannot leave his ship for fear of  "Yakuza" and will probably end up melding with sections of it like a scene from Pirates of the Caribbean.

"I will participate as an observer within the boundaries established by the (court)," Watson wrote.

"For the 35 years since I founded the Sea Shepherd Conservation Society I have strived to act non-violently and within the boundaries of the law, and when that has failed, which is most anytime I get motivated enough to waddle from my writing desk on the Steve Irwin, I have endeavored to lie my ass off about pretty much everything in my life. You see, when it comes to getting honest people to give me money so I can behave like a complete lunatic, making up stories about being shot in the chest by the "Yakuza" or how they are after me all the time, or how they sneak on board the Irwin at night and raid the community fridge taking pies away, the bigger more outrageous the lie the better...wait is this thing on? Crap I thought this was OFF the record...can we delete this?....no?....ummm the "Yakuza" said that."

About Shark Diver. As a global leader in commercial shark diving and conservation initiatives Shark Diver has spent the past decade engaged for sharks around the world. Our blog highlights all aspects of both of these dynamic and shifting worlds. You can reach us directly at sharkcrew@gmail.com.
Posted by Horizon Charters Guadalupe Cage Diving at 12:51 PM 2 comments:

Labels: as we see it, conservations laughingstock, sea shepherd news, the fat man and the whale party, yup

Can One University Student Save Sharks?

The idea of shark conservation has been around for many years but are we winning?. Shark finning seems to keep going, despite efforts to ban it. Poachers catch sharks illegally and few countries have the will or means to enforce their own protection laws for sharks.

Don't get me wrong great strides have been made to protect sharks over the years but I get the nagging feeling we're not quite there yet.

Of course we do, but will that solve the problem? What can we as individuals do?

Chelsea Stephens, a student at the University of Rhode Island came up with an novel idea made with 49cents worth of pvc pipe.

She developed a "hook-blocker", a device that reduces the chances of a Sand Tiger Shark, a protected and rapidly declining species, getting gut hooked and dying.

The device is a simple pvc pipe attached to the fishing line about 7 inches above the hook, preventing Sand Tiger from swallowing baited hooks.

In my view, that's how to do conservation. Real world and immediate solutions that save sharks now.

It's frustrating sometimes to look at the big conservation picture and intuit progress, but if we look at many small and regional things that we can change, we can all make a difference.

At first I thought, why do they have to wait 2 years?

But after a little reflection I realized that even though it's just a small step, and those state dinners don't exactly use a lot of shark fins, it signals a change in attitude. Maybe if the government stops serving shark fin soup, then the people will follow suit and stop serving it at weddings and little by little, the demand for shark fins will get smaller.

I guess I am old school when I believe that many small, smart conservation efforts can actually lead to big changes for sharks. Chelsea Stephens showed us how, with a piece of pvc pipe and an imagination, you can be part of the progress.


About Shark Diver. As a global leader in commercial shark diving and conservation initiatives Shark Diver has spent the past decade engaged for sharks around the world. Our blog highlights all aspects of both of these dynamic and shifting worlds. You can reach us directly at sharkcrew@gmail.com.
Posted by Martin Graf at 12:17 PM No comments: