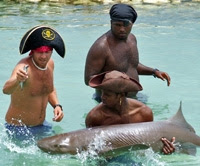 Question: How can you tell the difference between an eco minded shark diving company and one that's perhaps...a bit lacking?

Answer: In today's website world anyone can make claims like "100% safety record", the fact is the consumer needs to digg a lot more than they do to discover the truth. Not all companies out there will admit serious and ongoing operational problems...even if it's the right thing to do.

In the case of these unrepentant yabbo's anyone with half a brain can see this is probably not the best of vacation ideas. Not only do you get a dorky looking pirate hat in Jamaica to go wrestle sharks, but chances are you'll be drunk in the process:

"See Pirates of the shark's cove and the rambunctious and hilarious Shark Show!" D'arrrr!

We'll say it again for anyone who cares to listen. "Sharks are magnificent animals, isn't it enough to just get to see them in their natural habitat?
Posted by Horizon Charters Guadalupe Cage Diving at 5:03 PM 2 comments: 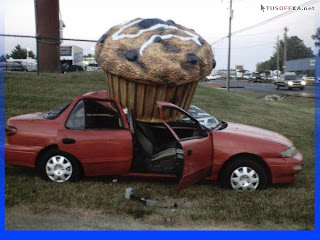 This has nothing to do with the Muffin Man-sorry Richard. This has everything to do with another strange "Fish Rain" story reported in the small town of in India (where else).

We know some of you reading this will scream, Underwater Onion! and go back to your spread sheets, but wait, there's more:

"Late home-goers painter Babu and his friends felt something falling on their body along with raindrops while they were standing near the bus stop at Kandanassery. On a closer inspection, they found many two to two-and-a-half inch long fish writhing in the ground and road in the area."

Now if we were the painter "Babu", we'd be thinking "End of the world baby, George Bush was right!"

Four months ago the crew and divers of Shark Diver were treated to a rare and spectacular feeding event at our Isla Guadalupe white shark site. In this video-shot in part by CICIMAR shark researcher Mauricio Hoyos-a 15 foot Great White is ripping apart a 700lb elephant seal.

We wrapped the video up and stuck it on You Tube with Luke Tipple our dive operations manager as the front man. Much to our surprise this video just hit 500,000 views this morning. This kind of shark attack is a rare event at this site:

Posted by Horizon Charters Guadalupe Cage Diving at 9:40 AM No comments: 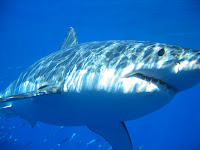 He's been gushing to the media the fact that there had only been one fatality in 2007 resulting from a shark attack worldwide.

""The danger of a shark attack stays in the forefront of our psyches because of it being drilled into our brain for the last 30 years by the popular media, movies, books and television, but in reality the chances of dying from one are infinitesimal," Mr Burgess added."

The crew here at Shark Diver could not agree more with George.
Posted by Horizon Charters Guadalupe Cage Diving at 9:04 AM No comments: 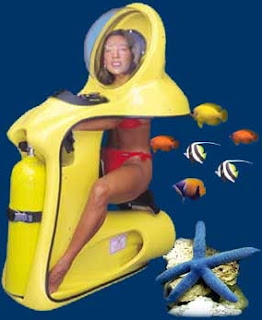 This is pretty much the dumbest idea to come down the pike since the invention of the UW Pager For Business Travelers.

Once again some science/business guy has come up with a way to get non divers down to an incredible 60 feet without knowing the first thing about scuba.

"This year the company will build 100 Scuba Scooter units from fibreglass moulds for a chain of international resorts in Malaysia and by next Christmas it's hoped a million of the units will be out for sale".

Shark Diver will soon be marketing the all new "HUD-view mask" guaranteed to warn you when a Scuba Scooter, driven by a Narc'd Malaysian, is weaving its way towards you.

Cue the Jaws music boys...
Posted by Horizon Charters Guadalupe Cage Diving at 8:24 AM No comments: