If you have not checked out our links section do so today. You'll find a great selection of weblinks with videos and images that will most likely blow your mind. Case in point the Davidson Sea Mount.

When possible, I like to keep close tabs on the world of octopuses, for two reasons: 1. Everybody has their hobbies, mine just involves cephalopod mollusks and don't you judge me, and 2. I often get the feeling that they're plotting something:

Savor The Moment-Live The Image 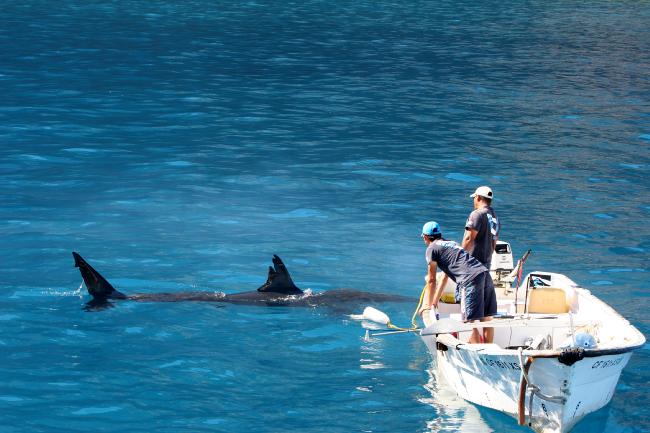 If you get a chance today click on this image to see it in full size. This is Isla Guadalupe. The shark is called "Shredder". He's a 14 foot bruiser who we came to know several years ago quite by chance when he decided to sever our brand new anchor line with a flying bite.

Since then "Shredder" has become famous the world over with several articles written about him and his exploits at this site. Along with "Bruce" and a few others, he's become one of the dominant males here and we look for his return every year. The image features Mauricio Hoyos CICIMAR shark researcher hoping to get a tag on him. Shredder eluded Mauricio that day.

Shredder has got one thing going for him. That once proud dorsal fin of his is a mess, in today's oceans that's a definite plus when shark finners are lurking around every nautical corner.
Posted by Horizon Charters Guadalupe Cage Diving at 9:08 AM No comments:

The goal was to direct funds from concerned divers and members of the general public into ongoing shark tagging and research studies being conducted by the team from CICIMAR.

We're happy to announce that this goal has been met, and that the CICIMAR team-lead by grad student Mauricio Hoyos has completed their work at the island and will be publishing their data soon. What the team discovered at this pristine site has answered three of the main questions that have puzzled us since we began operations here 6 years ago.

While we would love to tell you what they discovered, we'll let them tell you in their own words. Suffice to say, knowing what the sharks are doing at Isla Guadalupe on a day-to-day basis has made the entire 4 year effort worth it.

Additionally the IGC Fund now has a new home.

The Isla Guadalupe Conservation Fund is now managed as an advised fund at the International Community Foundation, a registered 501c3 not-for profit-organization which is dedicated to expanding charitable giving internationally with an emphasis in environment and conservation grant making in Northwest Mexico.

The ICF has raised over $30,000 with the extreme help and support of Mike Lever owner and operator of the Nautilus Explorer. Mike remains committed to all aspects of marine conservation and when he gets a chance he'll always step in and protect the critters he makes a living from.
Posted by Horizon Charters Guadalupe Cage Diving at 8:45 AM No comments: