I'm taking our boat to Guadalupe Island sometime this summer and go shark cage diving. I have lots of space on the boat and I'm willing to cost share this experience. The date is not set yet, (June, July, or August) I'm trying to see if anyone wants to do this with me. This is a private boat, not a commercial thing. I will bring the kayaks in case you want to bring a non diver, they can paddle around. I will send pics of boat or call me and we will talk about this adventure of a lifetime. This is on my "bucket list" so if your interested, call or email. xx0-432-3111 (home). 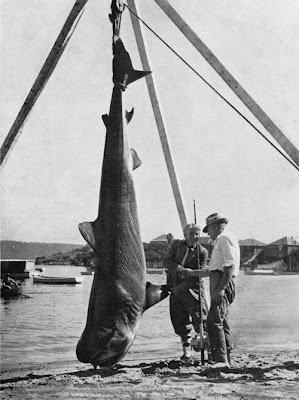 Question: How do you effect conservation change with shark kill tournaments?

If you are like many in the shark world protesting shark kill tournaments seems like the answer.

Unfortunately after a decade of protests by some of the largest NGO's and shark groups, tournaments are still going strong and tournament organizers have successfully characterized eco groups as "bomb throwing media loons."

Our effective rate for the cessation of these tournaments hovers at about 1%.

Of course there's another way, one that embraces the sport but leaves the sharks in the ocean. One that is guided by some of the best minds in the business, and one that will soon become the tournament model of choice for all shark tournaments nationwide.

This strategy is called change from within.

Welcome to the Guy Harvey Ultimate Shark Challenge, doing for sharks what the Marlin tournament model did for sustainable sport fisheries management almost 30 years ago.

Effective conservation change starts with new ideas, and smart thinking. This is what the folks over at the GHUSC are attempting to do this year with a certified catch and release model for shark tournaments. Gone are animals that will be caught and killed, gone also lightweight tackle and hooks that damage animals and gone are the images of animals that are strung up for waiting audiences.

Smart conservation change starts with a few brave and determined individuals willing to try something new, staking reputations and experience on outcomes that ultimately save sharks.

These folks do not build websites and send petitions. These folks dedicate 24 days to changing the way sharks are treated by the sport fishing industry.

As shark conservationists we can protest, petition, and create as many web pages as the Internet will hold. In the end it is boots on the ground efforts and real grunt work that effect conservation change.

Kudos to the entire team behind the concept and the Guy Harvey Ultimate Shark Challenge.
Posted by Horizon Charters Guadalupe Cage Diving at 9:17 AM No comments: