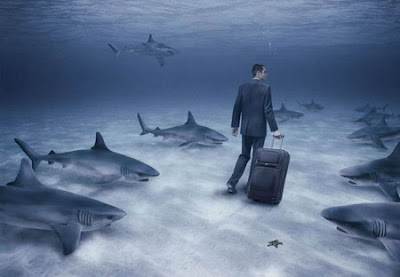 It's no secret that Big Tigers can be found in Bermuda. In fact next to the Bahamas this site shows a lot of promise for a new commercial site application.

It's called Challenger Banks and unlike the Bahamas Tiger Beach, this site sits in about 400 feet of water making it similar to what you might find with Mark Addison's Blue Wilderness in South Africa.

Thus far this playground is one for just a few shark researchers and the odd filmmaker. Time and desire from shark divers will tell if it see's commercial development or not. 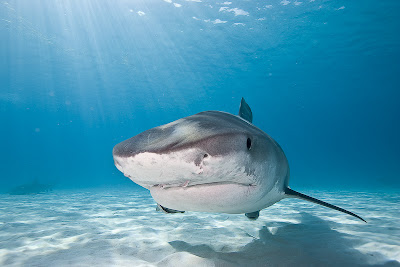 We got a call three weeks ago from adventure industry powerhouse and CEO of the Millionaires Concierge Doug Turner. He wanted to know if we could service high end yacht clients to the Bahamas to cage dive with Tigers and Lemon sharks...of course the answer was "yes".

Shark Diver has been providing cage systems and private yacht services to mega yachts worldwide since 2003.

The Millionaires Concierge is a unique site that covers almost every adventure imaginable from mega yacht charters to fighter jet experiences. These adventures are specially tailored to meet the growing demand for exceptional adventures for those who can afford it.

We're excited about the coming months with Millionaires Concierge and will keep you updated on the latest projects with them.
Posted by Horizon Charters Guadalupe Cage Diving at 10:24 AM No comments: 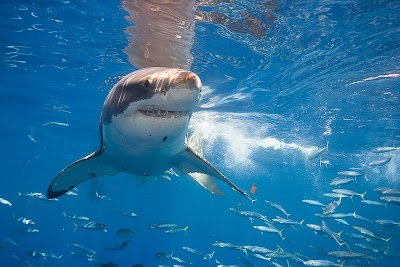 L.A Times writer Peter Thomas came out with a blog post this week reviewing a recent newsletter from one of the operations on site who make no bones about their ability to conduct "shark chumming". The newsletter includes images of chumming and several references to sharks eating hang baits.

As we have been reporting according to the MX Navy who were at Isla Guadalupe at the start of the 2008 shark season, chumming has been banned:

This month Scuba Diving Magazine picked up the chum ban and went into some detail on this issue. So, the question is, what's the deal?

As we have been looking into this it seems there's the beginnings of a shift. Mexico's Navy says one thing and certain vessels that operate out of Mexico openly and blatantly do another. The vessel in question was boarded by the navy in August and according to the navy told the same thing as US vessels "no chumming". The implication here is that this vessel has acquired the sole permit to chum while the rest of the fleet has not. It's an interesting claim we would like to see that paperwork-and run it by the navy.

We wish we had some sort of definitive answer for you. We can say that according to the navy the chum ban is still in effect, no operation has received permits to discharge, although as this is Mexico, everything is just a signature away.