Shark Divers Jeff and Pat Stein joined us recently at Isla Guadalupe For a couple who had been waiting a few years to experience the great white shark, this expedition was everything they had hoped for.

This trip is something Jeff wanted to do all his life. He was not disappointed. It was more than he ever imagined. We had never done anything like this before and we were a little afraid. The first time Jeff went down he was shaking so hard he could hardly hold the camera. But once he was in the water he had a great time. He gets tears in his eyes when talking about the trip and says it was life changing to him because he is so into saving the sharks efforts.


We have to mention how helpful the crew and Luke were. Pat was shot a few years ago and as a result has a foot that doesn't work properly. This made things a little hard for her to get in and out of the water. All of the crew were so kind in helping her. Also, the first time she went in the water she kind of panicked, so Luke took her a step at a time and got her into the water. She was afraid she would not make it, but was so happy he got her into the water so she could see all the beautiful sharks.

She saw so many sharks and some very close up and personal. Also, on the last days the captain took us close to the island so we could see the seals and sea lions and explained the differences between them. He also, told us about the history of the island. Very interesting!!

We also must mention "Skippy" the cook. The food was awesome!!! He was very nice and made exceptions in the menu with kindness and grace.This was truly a trip of a live time and we highly recommend it to everyone we talk to.

P.S Jeff says he would love to do it again. 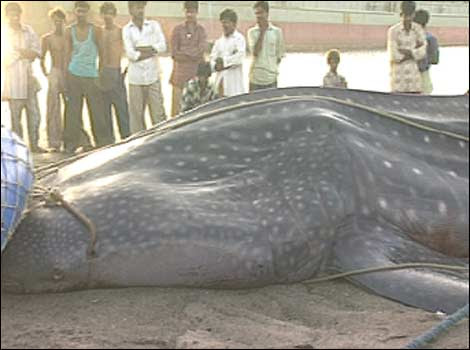 Our new weekly feature on Underwater Thrills:Swimming With Sharks is the "Shark Fin Du Jour".

It's a weekly look at Alibaba.com the NYSE of Shark Fin Products on the Internet-Sponsored by Yahoo! Inc.

We will take you into the individual sellers listed on that site and introduce the top companies, what species they sell and how many thousands of pounds of shark fins they have for sale on the global market. 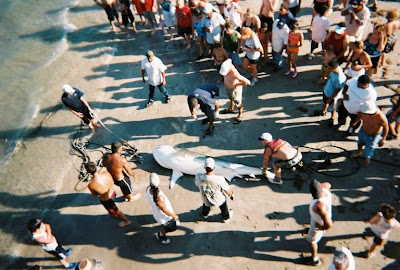 Here's what's wrong with this weeks story from Australia. It has the words "sharks" and "cancer" in close proximity.

For anyone in the shark conservation world we all remember too vividly the wild neo-scientific pondering of shark cartilage and cancer cures. The end result was a decades long rush for raw shark product and the death of millions of sharks for cartilage that years later proved no link between cures for cancer.

With the numbers of sharks being killed for both sharks fin and sharks liver (squalene) the planet can ill afford another headlong rush into sharks blood cancer cures. Soon to be available on yours and ours favorite web portal Alibaba.com.
Posted by Horizon Charters Guadalupe Cage Diving at 1:17 PM 2 comments: