The Giant Squid autopsy from New Zealand we blogged about earlier this week now has a video for your review. Thanks to the good folks at current.com for sending this in.

While it's not an alien autopsy, it might as well be.Rumor is these are also tasty critters:

A lot of people ask us what cage diving with Great White sharks is like. It's moments like this. Shot in 2004 at Isla Guadalupe, Mexico with Sterns Bullen (fearless shooter) cage left with a frisky 12 footer:

Posted by Horizon Charters Guadalupe Cage Diving at 10:31 AM No comments: 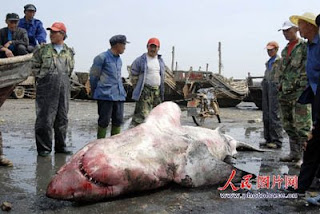 One year ago this news report surfaced about a massive shark taken off the shores of Shandong China.

The story was being used at the time as a propaganda piece:

"A super large shark, which is 4.5 meters long, 2.6 meters round and weighs 630 kilograms, was caught by fishermen in Rizhao, east China's Shandong province on Monday morning. Such a big shark is extremely rare. It indicates the coastal waters' quality has been improved."

If you look at the area on a map, the shark was likely taken in the Bohai Sea which makes us wonder what white sharks are doing in this area in the first place?
Posted by Horizon Charters Guadalupe Cage Diving at 8:28 AM No comments: 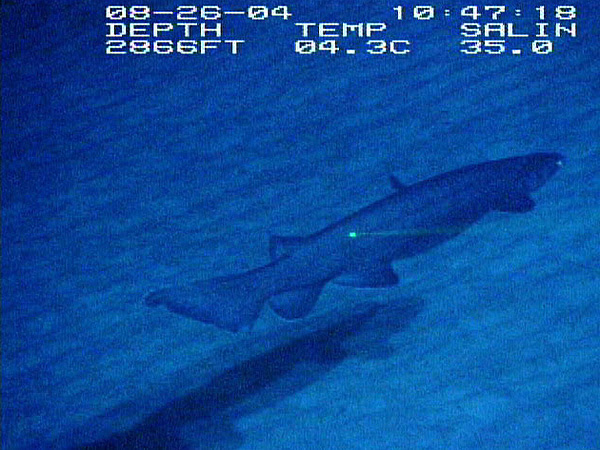 Back in 2004 researchers with NOAA shot this ungainly looking critter around 3000 feet deep.

They think it is a new shark species and is close to 22 feet long. Yes, that is a green laser being used to gauge the size of the animal and the distance from the submarine.

What's fascinating about this fellow is the tail set up-which is completely unlike anything seen previously-even with deep water shark species.

Unfortunately they have not seen another one like this in the past 4 years of deep water exploring. Unlike the Blunt Nosed Six Gill which seems to be everywhere. Some deep water sharks seem to be as rare as some of their top water cousins.
Posted by Horizon Charters Guadalupe Cage Diving at 8:10 AM 1 comment:

Sharks and The U.K Media 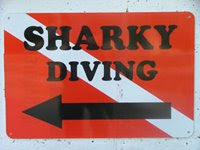 The Times recently covered shark attacks worldwide with a completely hysterical and not surprising bias. The following quotes were taken from that article.

By employing broad unsupported statements about sharks and the use of the classic "but experts have said" they continue to propagate fear in the reader about sharks. What we have here is a failure to communicate.

Quotes from the article:

1. " Another theory suggests that the killer shark off California may have been trying to protect a newborn pup".

2. "But experts have said that great white females are more likely to eat their offspring than protect them".

3. " Some argue that thriving seal populations are attracting sharks to tourist areas, especially during March and April when female sharks arrive in the warmer waters between California and Mexico to give birth".

When will media begin to report these unfortunate events from the sharks P.O.V?
Posted by Horizon Charters Guadalupe Cage Diving at 7:25 AM No comments: