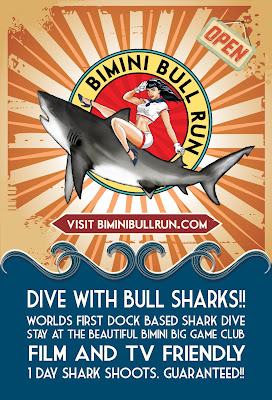 Martin Graf from Shark Diver is having an amazing month in Bimini, Bahamas getting to know the locals or Bull Sharks in the marina at the Bimini Big Game Club.

The Bimini Bull Run crew asked Martin to join us to help set up the world's first dockside shark diving operation because of his decades long experience with sharks in Mexico at Isla Guadalupe.

Bimini Bull Run is also a new film and tv hub site for all shark production needs while on Bimini. Our one day shark production site works in tandem with commercial shark diving operations and shark safety.

We take shark diving seriously at Bimini and always have. The team here at BBR have been working with sharks for the past decade in the Bahamas. We see sharks as they are, top predators, not playthings, not toys, and not a resource that we can abuse.

Sharks are wild animals, they are magnificent, and they must be treated with respect - always.

At Bimini Bull Run our goals were simple, bring the world of wild sharks to as many people as we could and hopefully they will come to understand these animals, their eco systems, and the wild places they live in as places we need to protect for future generations.

About Shark Diver. As a global leader in commercial shark diving and conservation initiatives Shark Diver has spent the past decade engaged for sharks around the world. Our blog highlights all aspects of both of these dynamic and shifting worlds. You can reach us directly at sharkcrew@gmail.com.
Posted by Horizon Charters Guadalupe Cage Diving at 5:38 PM No comments: