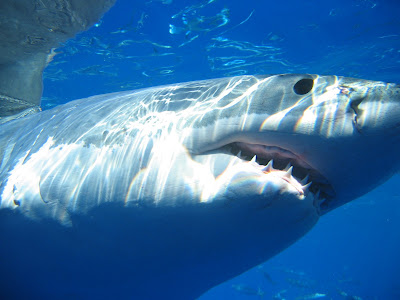 As we get close to a wrap for 2008 there's a chance to look back at a remarkable year for the shark diving industry and for shark conservation.

To say that things have solidified on the conservation front is an understatement...what we have now is a full fledged, organic, top to bottom shark conservation movement, and it's paying dividends.

On the commercial shark diving front a growing awareness of "being a global 200 million dollar industry" and the absolute need now for local site conservation efforts. The old paradigm of just maintaining commercial operations is being replaced by site activism, awareness, site stewardship and shark conservation measures. It has taken a series of horrific local site kills from South Africa to the Bahamas to bring this issue to the front burner-but it's here and operations are slowly pushing back. It is also good to mention the several forward thinking operations from Fiji to South Africa who have been leading this charge for years now. It starts with "One".

Has this been a good year for sharks? No, the slaughter continues unabated, but that slaughter is no longer being conducted in a total vacuum. NGO's, websites, blogs, major news outlets, literally thousands of people are, getting involved, raising banners and spreading awareness like wildfire.

It's remarkable really when you consider all of this has been for sharks. Not Panda's (sorry Panda People) but sharks. There's still a lot of work to do, the announcement by Alibaba and Taobao comes with a caveat yet to be announced. Our hunch is this valuable division within the company has been transferred to another site perhaps as a stand alone "take the heat and answer to no one", time will tell.

For now we can all enjoy the fact the shark conservation round table has no empty seats...let the fist pounding begin!
Posted by Horizon Charters Guadalupe Cage Diving at 8:48 AM 1 comment: